Good work on getting all the new gear from the last update into the wiki! I'm glad to see they got put in there so quickly. Cheers! Ganiman

It really shows off the beauty of the Wiki. Information can be added as soon as it is released.

Please use the correspondent (feather) icon add to newspaper article. I cant seem to make a small enough pic to add to it. Thank you. Please delete if this is takeing space*

Add this to newspaper? Edit

Here's the image...did you want me to add it to the newspaper page or the Player Icon Priority page?

its a staff icon so as you said it wouldnt fit in players right?

After thinking about it...Maybe I should add them in. I know if I saw a player with a feather-icon running around I'd be like "wtf?" and try to find out what it is. So maybe we should add the staff icons...

We moved and so had to take it down from where it was located - we're still trying to find somewhere to put it back up :-( i'm sorry!!

Thanks for the help with the addition to the Garrison content. Looks good. My linkshell plans to continue with Garrison runs on a bi-weekly basis. I'll try to get more confirmation about how external mobs can or cannot interfere with your Garrison run. Ganiman

response to a message Edit

ghouls in the Maze and Horutoto do drop skull, it has happened to me in the past. the drop rate is much rarer than their valkrum and gusgen counterparts and these ghouls are much stronger as well.

chest keys from mobs in maze drop in the eastern side, not the western side.

Okay, I'll stop putting it on bait, thx for the heads up ~~Chrisjander

You are an unstoppable force! Edit

Thanks for your many contributions to this site Rixie! I am amazed at how many pages have your stamp on them -Bovineaddiction

>.< Thank you! I am a bit...obsessed I guess...freshly graduated and without a job until August I have a lot of time on my hands :-P Thanks for the acknowledgment though! It's very appreciated!

Drop rate isn't from a site, its from personal experience :) I do it alot with 3x Drg/Rdm. We always get a bat fang/wing, a random scroll, and one or two platoon weapons. othertimes we might get colored rocks, or mythril beastcoins. If there were a site, I'd post it to give credit, and so other people could check the drop rates on other bcnm's, but alas...

Have you been editting the items like I've started doing, i.e. making em look in the Statistics like it does in the graphic?

It looks like it, cause I'm almost positive I didn't edit the Diablos staff.

If so, right on, thank you. I find it much easier to look at the item stats if its in the same format as the game. Everyone who plays is used to seeing that format anyway, so why not make it easier for them. Its the other information (which I see you've added) that needs its own format, like DPS and TP per swing.

First, you've done an excellent job adding so many items. Without a picture its sometimes tricky to figure out the order the jobs are supposed to be listed in after level (e.g. the line with Lv. 1 WAR/MNK etc). If you haven't figured out the order they put things in already, its pretty easy. Just look at your Job Levels under Status in the in-game menu. Just read them left-right, up-down and that's exactly the order they put the jobs in, and of course they remove the jobs that don't apply to the weapon/armor.

Here's a quick pic to demonstrate ;) 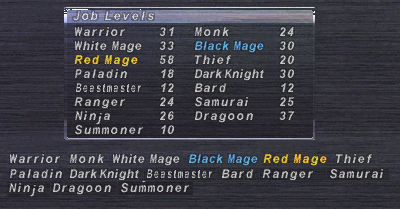 I figured I'd give you this info cause you seem to be the only one besides me using the in-game format for the statistics of items. Hope this is useful to you. --Chrisjander 01:22, 12 March 2006 (PST)

Guess What? I had a boring session with MS Paint! Edit

In case anyone was interested...Apparently Allakhazam.com was recently bought by IGE, in an indirect manner. Basically a "mother company" now owns both IGE and Alla, as well as a number of other sites. There's a thread the gets into this here: http://www.allakhazam.com/forum.html?forum=3;mid=114668646932202500;num=0;page=1

There's another page that is written from a WoW players point of view, but still details the history of IGE and its relationship to MMO resource sites here: http://wow.azzor.com/445/truth_about_IGE.php

While I will still probably peruse Alla from time to time, upon hearing this news I immediately cancelled my auto-renewed premium membership (which I barely used and only signed up for to help support the site) Aurikasura 17:41, 8 May 2006 (PDT)

You might be interested in seeing how we use the Item Template now, so check out the guide I made (should be self-explanatory). Good to see you back.