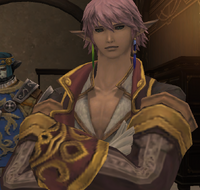 The leader of the Order of Woltaris, one of Adoulin’s Twelve Orders. He is also a staunch proponent of the colonization initiative, due in large part to his sense of duty to foster economic growth as the minister of finance. He makes no effort whatsoever to hide his preoccupation with the Ulbukan hinterland and he made his support for Ygnas's reinstatement of colonization unequivocally clear when the chancellor's plan was unveiled. He has recently shown interest in the various goods pioneers return with in hopes that they may lead to an increase in the city's mercantile prowess.

Retrieved from "https://ffxiclopedia.fandom.com/wiki/Melvien?oldid=1675521"
Community content is available under CC-BY-SA unless otherwise noted.