In Christian demonology (Late Medieval- Early Modern European), Amon is a demon with the rank of Marquis of Hell, commanding 40 legions of demons. He appears as a wolf with a snake's tail and who can breathe fire, or as a man with dog's teeth who is situated inside of a raven, or as a raven-headed man. He can talk of matters from the past and the future as well as reconcile friends who have split over controversy or which have a feud going on. Amon is 1 of 69 demons listed in the Pseudomonarchia Dæmonum and 1 of 72 listed in the Ars Goetia (the first section of the Lesser Key of Solomon). 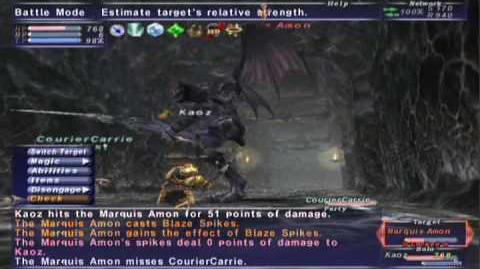 Retrieved from "https://ffxiclopedia.fandom.com/wiki/Marquis_Amon?oldid=1675445"
Community content is available under CC-BY-SA unless otherwise noted.