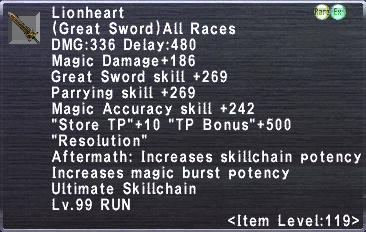 Lionheart refers to the English knight King Richard the Lionheart (Le Quor de Leon), who was given the moniker due to his "noble, brave and fierce leadership" in the siege of the sturdy French castle Castillon-de-Agen Wikipedia. Also, "Resolution" means "firm determination," a quality Richard had throughout his military career, including the Crusades.
The required Attestation of Righteousness is dropped by a paladin (knight) mob. Naming the great sword Lionheart is similar to the naming of the great sword Braveheart, dropped by a paladin mob.