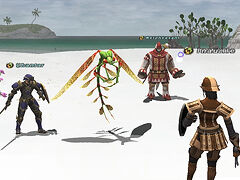 Level Sync is a party leader-activated system whereby the level of all party members is restricted to that of a designated player. When this feature is activated, all members of the party will be able to receive an amount of experience points corresponding to the level of the designee, regardless of any initial disparity between them.

Level Sync will remain in effect only within the area in which it is activated, and will automatically be deactivated for all members should either the party leader or the designee leave the area. For all other players jumping to new areas, synchronization will be deactivated only for themselves.

Since status effects such as Invisibility, Sneak, Protect, and Shell are cancelled (with the exception of effects granted through the use of an item or Spectral Jig), please exercise caution when activating Level Sync, or when joining a party where the feature is presently active.

Only the party leader can activate and deactivate Level Sync. Other players wishing to cancel their own synchronization can do so simply by leaving the party.

Doing so will cause all other party members' levels to be restricted to that of the designee. Players whose levels are lower than the designee will receive no adjustments. A red marker within the party status window identifies the player to whom the party's level is being synchronized.

The Level Sync status icon will then appear on each individual party member's screen, along with a status icon being displayed on the left side of each PC's name.

Level Sync cannot be activated under the following circumstances:

Please be aware of the following when engaging Level Sync:

Level Sync will activate immediately for players in the same area as the party leader upon joining. Players in different areas will not undergo synchronization until they enter the area of the party leader.

Provided all conditions are met, Level Sync will go into effect instantly and automatically, so players seeking to join a Level Sync party should be aware of the party leader's location and the situation around them.

Only the party leader can deactivate Level Sync. From the main menu, select "Party," then "Lvl. Sync Off." There will be a countdown period of thirty seconds, after which Level Sync will be deactivated for all party members simultaneously.

The following conditions will cause Level Sync to disengage automatically, for either all or individual party members:

While Level Sync is active, players will receive 100% of the experience points they are eligible to obtain at their reduced level. Experience will not be gained, however, should any of the following occur:

The amount of experience lost when rendered unconscious will be based upon the player's level after Level Sync is in place.

If the designee levels up or down while Level Sync is in effect, the synchronized level will automatically be updated for all party members.

Whenever a Level Sync or any other level restriction is in effect, the player's actual level and experience point values can still be viewed via the "Status" option under the main menu.

The new changes will also allow players to equip gear beyond that allowed under previous level restrictions. This applies not only to the new Level Sync system, but also to level restrictions brought about by entry into battlefields, assaults, Ballista, areas such as Riverne, and so on. Though the level of gear will no longer play a role in determining whether or not it may be equipped, level restrictions will cause statistics and effects to be adjusted.

Introduced in the November 2021 Update, A master level sync feature has been added.

Players will be able to set a master level sync in addition to the standard level sync if the following conditions are met.