Getting rich quick. It's something everyone dreams of. Helping some to achieve that dream is a new form of gambling that is making inroads in the Outlands. It's called " Lucky Roll. " I traveled to Norg to check out the facts.

It is said that far off the mainland, in Rabao and Norg, can be found the proprietor of Lucky Roll. Rabao is an oasis in the middle of the Altepa Desert, a common destination for adventurers seeking their fortunes. Norg is a haven for pirates and brigands that make their living in black markets and gambling. These are just the types of places where something like Lucky Roll can gain a foothold.

Upon arriving in Norg, I began my search for the facts right on the quay. The first person I spoke to turned out to the very man who for whom I was searching: Repat, the proprietor of Lucky Roll. At first glance, Repat has no distinguishing features, but deep in his sleepy eyes is the sparkle seen only in the eyes of a man strong enough to survive in the Outlands.

After sizing me up, Repat slowly explained the rules of the game:

I paid the 100 gil and grabbed the dice. I asked what the point total was but was met with a laugh and a shake of the head; Repat is not about to answer a question like that until after you've thrown the dice.

The die rattled into the small cup and spun to a stop, revealing the number to be added to the running total.

" I'm sorry, but that's it for today's game of Lucky Roll. Come by tomorrow, and maybe Lady Luck will be waiting for you! "

" So close to 400 points! Just a little bit more! One more try! Tomorrow comes too slow! " was all I could think.

But how many more people would need to play for the score to reach 400? A six-sided die averages out to 3.5 points per throw. This means that it takes 100 throws to cover the cost of the jackpot--with the last 15 throws going into Repat's pockets.

A fifteen percent profit sounds like a great deal for the house, but when you consider the extra prizes, it wouldn't be surprising to see the house go into the red once in a while. So why bother? 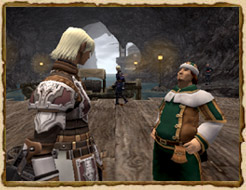 While I was considering this, a group of adventurers came up and paid Repat their 100 gil each.

Very soon, there were shouts of joy. Someone got a Lucky Roll. The barest hint of a smile spread across Repat's face as the adventurer happily collected his prize.

What was he thinking as he saw the happy adventurers off? Repat pulled a coin from his boot and deftly rolled it over his fingers, muttering " Front and back, back and front. Words and actions, lies and truth. "

I was about to ask what this meant, when he answered my question by saying to some passers-by,

" And that's it! Pretty simple, huh? You can attack from the get go or you can sit back while other people roll, then come in for the final kill. We provide the dice, you choose the strategy. "

Hearing those words, I understood. No adventurer traveling into the Outlands does so without dreams of wealth, but only a scant handful ever make real the dreams that led them to adventure. Lucky Roll is the same.

Repat clearly enjoys watching the lives and actions of those who visit Norg. He'll probably keep this game running for a long time.

My own 100 gil is in the hands of those lucky adventurers as I leave Norg. Maybe you'll be the next to get a Lucky Roll.

Retrieved from "https://ffxiclopedia.fandom.com/wiki/Instant_Wealth_in_the_Wilderness?oldid=88804"
Community content is available under CC-BY-SA unless otherwise noted.