View source
watch 02:30
Dead Cells Final DLC - The Loop
Do you like this video?
Play Sound
This article is about the summoning spell. For other uses, see Ifrit (Disambiguation).

Summons Ifrit to fight by your side 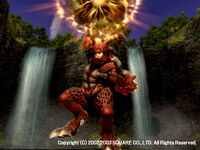 Ifrit's Blood Pacts are all fire-based.

A blazing incarnation wreathed in the flames of retribution. Ifrit aids the summoner with its command over heat and fire. Ifrit is one of the Celestial Avatars.

In Arabic mythology and Islamic folklore, Ifrit (also spelled Efreet) is a type of Djinni affiliated with fiery areas or residing on dimensional planes of elemental fire (grouped with Fire element in occult texts). Djinn (spelled جني in Arabic; more commonly known in English as the Genie; also spelled jinni, jinn) were sentient spirit-beings (sometimes called demons) composed of “smokeless fire” (a loose translation of the actual word, which is “subtle fire”, a fire that burns without smoke).