The Grim Tale of Pyracmon and the Baleful Eye

From October 19th at 1:00(PDT) until Monday November 2nd at 1:00(PDT), the Halloween Harvest Festival 2010 shall be active. The fiend Pyracmon has once again fallen on Vana'diel. It is up to the adventurers of the world to stop him.

These lanterns can be purchased from the event moogle in each of the 3 nations. Each lantern is 5,000 gil.
Northern San d'Oria (D-8)
Bastok Mines (H-9)
Windurst Waters (north side) (G-10)

These lanterns can be purchased from the event moogle in 1 of the 3 nations. Each lantern is 10,000 gil. The new Pricket lanterns can only be bought at their respective nation. 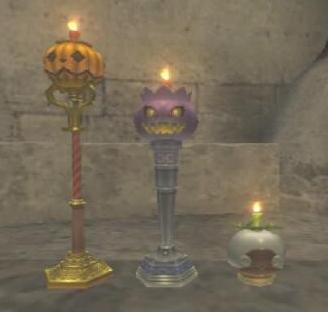 For a list of current theories about trading sweets, there is a guide at Harvest Festival Pumpkin Staff Guide.

The trading of sweets for the items in this section differs considerably than that done to obtain costumes. Multiple trades of the same sweet(singularly) are not only possible, but a preferred strategy. You must remove the costume usually granted with the first sweet trade before you continue trading. If you use different sweets when trading, you will have to cancel different costumes, so it is better to stick with just one sweet, preferably cheap cookies.

Useful information and tidbits about the mechanics of the festival

Costumed NPCs for Items and Costumes

Storyline of the Dark Lilies

Retrieved from "https://ffxiclopedia.fandom.com/wiki/Harvest_Festival_2010/Guide?oldid=1365719"
Community content is available under CC-BY-SA unless otherwise noted.