Welcome to the Year of the Rat!!!

As with every year a herd of this year's animal on the Chinese Zodiac parade through the open fields bringing good luck and prizes! Follow the Chocobos around and trade them any random item to get a random buff and prizes.

Once per earth day, you may trade Chacharoon in Ru'Lude Gardens (I-8

) gil to receive New Year's Pouch and one of the following (depending on amount of gil traded):

Although not required to get prizes, there are starter npcs: Bunta in Bastok Markets (E-10), Jeanparmand in Northern San d'Oria (D-8), and Pyru-Copyru in Port Windurst (B-4). 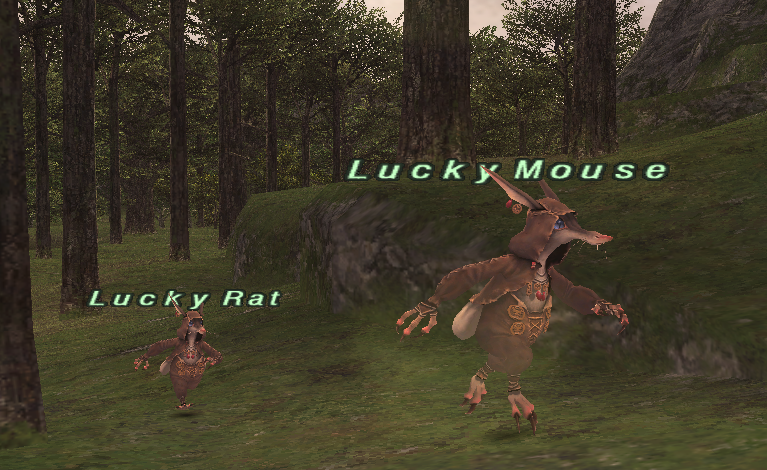 Trading items to them has a chance of rewarding items or a costume effect appropriate for the year. Possible rewards:

Most of the time, trading items only grants a short-duration buff including Protect, Shell, Enthunder, Shock Spikes.

Wide Scan is essential to tracking them down.

After obtaining the Battledore, on subsequent trades you will receive fireworks when selecting option 2.

Bring Cheer To Those In Need

You heard the Moogles! Grab your Caver's Shovel and saddle up; it's time to trample those Goblins in a race to the cards! Search high and low for the Overturned Soil outside of the nation cities in order to unearth the cards of fortune! But don't forget to bring your friends, because for every extra party member you have, you'll find +1 random card in each spot they've been hidden! Once you've gotten the right cards, return to the Moogles to reap your merry holiday bounty!

Trade in the following cards combos to the Event Moogle for the corresponding rewards and gifts!

The initial three combo bestows upon you a fantastical new stove (one from Bastok, San d'Oria and Windurst!) for your cozy Mog House! Just in time for the cold, Winter nights too!

The secondary three combo adds a dazzling new belt with audacious, mooglerific motif to your already-festive raiment (they have mystic transformation abilities too)! Wear it while you help your friends for a +2 to your "In Your Face Goblins!" job trait!

The straight seven combo is the ultimate combination you can make with the cards of fortune, and for good reason too! Turning in all seven cards at once is going to score you a marvelous piece of attire that'll not only keep your neck warm against the frosty weather, but spirit you away to any one of the three starter nations within the blink of an eye!

Players may only receive this bonus once they have received the rewards from Initial Three and Secondary Three.

Goblins will run towards where the cards are so following them can allow you to find the next card spawn area. However, because they are on chocobos, without movement speed (such as flee) you will quickly be left behind if they are running far away.

Additionally, each zone seems to have preferences for which cards drop with which frequency. Most common cards in each zone listed below in bolded text

Because of this, it is efficient (especially if working towards the items with friends) to move between areas if you aren't having luck with the "rare cards" in a specific zone.

Goblin Riders and Fablinix are in every area listed above and are competing with you to find "Overturned Soil." When they dig at one it will vanish, so be fast!

Retrieved from "https://ffxiclopedia.fandom.com/wiki/Happy_New_Year_2020/Guide?oldid=1714279"
Community content is available under CC-BY-SA unless otherwise noted.