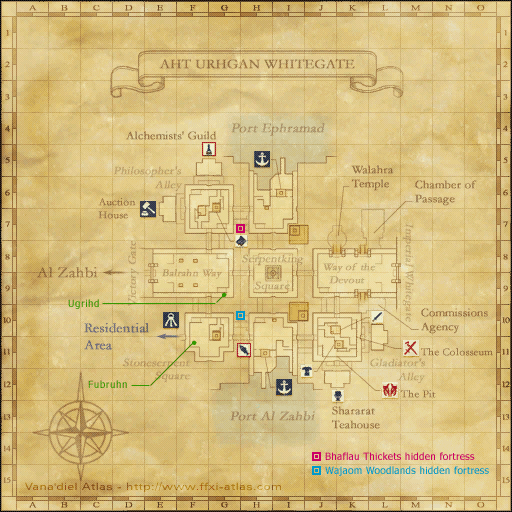 Ghanraam will take level 15/25/35 armor from Salvage ruins expeditions and certain crafting materials and, for a fee, exchange them for finished pieces of Salvage armor. These armor pieces are detailed below.

Ghanraam can also store the individual armor components for one of the five sets of Salvage armor. To do this, you must first select a set (Ares's Cuirass Set, Skadi's Cuirie Set, Usukane Haramaki Set, Marduk's Jubbah Set, or Morrigan's Robe Set); only the component pieces of one set can be stored at one time. This puts a limit of 15 on the number of pieces Ghanraam can store. The selected set can be changed at any time, but any stored components of a different set must first be removed from storage. There is no cost to either store component armors or remove them from storage.

Additionally, Ghanraam can store the 20 Vigil Weapons acquired from the NMs of Nyzul Isle. It costs one Imperial Bronze Piece to store a weapon (traded with the weapon). You may store one each of as many of these weapons as you like.

Storing a weapon with Ghanraam will erase all weapon skill points associated with that weapon.

I can see you are a most inquisitive individual.
Allow me to feed that burning curiosity with a delectable nugget of knowledge.
You are familiar with the Ruins of Alzadaal?
Yes, those expansive ruins that honeycomb the western regions of this mighty nation.
Mount Zhayolm, Arrapago Reef, Bhaflau Thickets, the Silver Sea... Wonderfully rare pieces of armor have been discovered within the remnants at all of these locations.
How wonderfully rare, you ask?
Why, these relics are so splendidly rare that even I, an avid collector, have been unable to acquire a single piece!
Rumors among my fellow armor aficionados say that these lost treasures belonged to foreign mercenaries that fell in battle while escorting an archaeological research team.
The rumors also say that these were no ordinary mercenaries, but famous adventurers to whom the Imperial Palace extended a personal and lucrative invitation...
Funded by the inexhaustible coffers of the palace, the exquisite armor they wore was forged by the finest craftsmen, without regard for trivial matters such as "cost."
Oh, how I would dearly love to behold such masterpieces...
But let us not dwell on such negative emotions. I have piqued your interest, yes?
And now I have a request: I would ask that should you come into possession of such a wondrous treasure, that you surrender it to my greater expertise.
Though I may seem quite savory, I have connections with the Al Zahbi underground--specifically the Rogue Artisan Guild. They have expressed an interest in examining the craftsmanship of this armor. Although I cannot deny my own desire to gaze upon...
Ahem. Naturally, I do not make this request devoid of the promise of compensation. After the armor is examined, it will be returned to you in pristine condition, reforged into a more powerful form.
Perhaps this catalog will better explain what you stand to gain...

There are five sets of armor that can be forged in this way, but I can only handle negotiations for one set of armor at a time. Why, I can barely imagine staying conscious in the presence of but one of these fantastic creations...
Feel free to bring me even a single piece you have found in the remnants--I shall store it in my gallery with the utmost care and vigilance.
Hm? Will the armor be safe?
My dear sir, that gallery was built to store my precious collection! An army of marids could not batter down its darksteel doors!
And yet it still does not house a single piece of...<sob>.
Ahem. Yes. I will gladly offer the use of my gallery, if only to display those treasures, for a short time...
Do not be concerned with my zeal--the armor will be available to you at any time.
I anxiously await any news of your success in obtaining these truly epic pieces.

When you complete a set of items and store the 3rd piece with Ghanraam, he will say something along the lines of "Most excellent. I see you have the items required for the hands of the Morrigan Robe." At that point, trade him the gold pieces and the crafting items. After that, you will have to wait one game day to acquire your hard-earned reward.

Note: While you are awaiting your reward to be finished, you cannot get Ghanraam to say anything other than something to the effect of "Be patient. Your armor will be returned soon." This means you cannot pull anything else out of storage, or check a recipe. This includes removing or reviewing any Vigil Weapon you might have stored with him.