Resale Price: Cannot be sold to NPCs.
Oboro will reforge this to Gastraphetes (119-2) in exchange for this item and 300 chunks of Beitetsu.

Upgraded from Gastraphetes (99) via the Marksmanship Trials 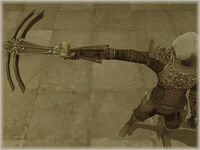