View source
watch 02:56
Raise a Floppa - The Loop
Do you like this video?
Play Sound
This article is about the summoning spell. For other uses, see Garuda (Disambiguation).

Summons Garuda to fight by your side 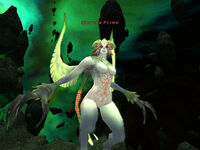 Garuda's Blood Pacts are all wind-based.

The queen of avians, said to soar through the heavens on immeasurable wings. Garuda aids the summoner with her command over air and wind.

The Garuda (Sanskrit: Garuḍa गरुड, eagle; Pāli Garuḷa) is a large mythical bird or bird-like creature that appears in both Hindu and Buddhist mythology.

From an Indian perspective, Garuda is the Hindu name for the constellation Aquila and the Brahminy kite is considered to be the contemporary representation of Garuda

Other nations adopt a more stylistic approach to the Garuda's depiction, where it depicts an eagle (being much larger than a kite).