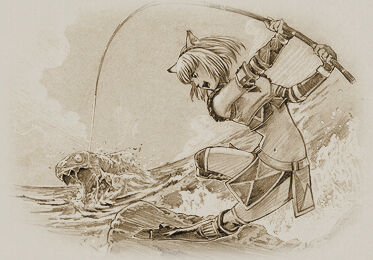 Fish Ranking is now available! To learn more about Fish Ranking, or to participate speak to the NPC Chenon at the Fishermen’s Guild in Selbina .

A certain variety of fish will be specified for each Fish Ranking contest. Players who wish to participate must obtain the fish and trade it to Chenon. The participant whose entry best fits the conditions set forth in the contest rules will be declared victorious.

Contest entries for Fish Ranking will be accepted for a period of two weeks (Earth time). After the competition is over, the results will be announced for the next two-week period. This cycle will continue so that the event is held twelve times a year.

Anybody can participate as long as they possess the fish specified by Chenon. There are also no rules regarding the method of acquiring the fish. You can catch it yourself, buy it at the Auction House, or search other players’ bazaars. (Purchasing from AH is a crap shoot if the fish was entered already it will not be usable. If purchasing from Bazaar make sure it has size weight tag or it was entered already. Some fish are obtained through non-fishing means, and lacking a size tag they are unusable for fish ranking.)

Three rules determine what kind of fish to seek for the contest.

Rule A: Type of Fish

The first rule specifies the variety of fish to be used for the contest.

The second rule specifies whether the fish will be evaluated based on its size(lm), weight(Pz), or both.

The third rule specifies whether the fish with the greatest value or the smallest value of weight/size will be declared the winner.

Speak to Chenon while entries are being accepted to learn the rules for the current competition.

Trade the fish specified for the contest to Chenon during the submission period to participate in Fish Ranking.

During the submission period, you may confirm your entry at any time at no extra cost. You may also withdraw your entry, or submit a new fish for entry if you come across one that fits the requirements better.

However, please take note that you cannot resubmit an entry that has been withdrawn or overwritten. You will still need to pay the full entry fee for each new fish registered.

The results will be announced following the two-week submission period. Speak to Chenon to view the ranking board. The ranking board lists rank, tier, the participant’s name, and entry details.

The top twenty participants will be eligible for the following awards.

You can view the ranking by speaking to Chenon during the announcement period and selecting “View ranking board.” If you have placed in the top ten, a special graphic will display, showing that you are eligible for an award.

In the event of a tie, all players will receive an award and a new title with regard to their tier, but the prize money will be divided among the participants.

Award winners may receive their prize at any time while the results are being announced. However, the player will no longer be eligible for an award after the announcement period ends, so it is important to accept your prize in a timely fashion. If your inventory is full, you will be unable to accept your reward. If you do not make space in your inventory and accept your prize before the announcement period is over, you will not be able to receive it at a later time.

All ranking results are erased at the end of the announcement period. However, you can view the number of awards received in each tier using the “View award history” option.

What is Fish Ranking?

Fish Ranking is a contest held periodically by the Fishermen's Guild. Participants compete based on a set of defined rules regarding the size and weight of a certain big fish.

To participate you must acquire the fish we specified for the contest and bring it here. We won't look over your shoulder to see if you're catching your fish or buying them. That's your personal decision.

You can only have one fish entered for Fish Ranking at once. You can choose to overwrite your current entry with a new catch, but you won't be able to reregister your previous submission.

We will announce the results after the submission period ends. The top ten entries will receive a modest award and prize money, as well as a new title.

Fish are judged based on a set of predetermined rules.

The rules are simple. All fish are inscribed with their size (Im) and weight (Pz). The contest may be judged on either number, or even both values added together.

Depending on the rules, the person who caught the fish with the lowest or the greatest value wins!

Value is determined by the calculation of "points" and evaluated based on the contest rules. For example, when the rules designate the "smallest fish," the person with the fewest points will win.

During the submission period, I will inform everyone what criterion we are judging by, so just ask if you're curious!

If you would like to submit an entry, please trade the fish specified for the contest to me, and I will give a rough inspection.

The fish will be registered if I deem it is suitable for the contest. You may ony have one fish registered at a time. Registering a second specimen will remove your previous submission from the entry database.

After you pay the registration fee, I will return your fish to you. All that's left afterwards is to wait for the results.

To ensure a fair contest, we will label your fish before returning it.

This will not affect the fish other than disqualifying it from reentry in Fish Ranking. You can still cook the fish, sell it at auction, or use it for quests.

After the submission period ends, the results will be announced. To view the ranking board, just speak to me.

Anybody may view the ranking board. You'll especially want to check if you or a friend participated in the last contest. Perhaps one of you will be listed on the board, too!

The top ten contestants will receive a modest award consisting of prize money from the Fishermen's Guild and a new title.

In addition, participants in the top twenty will receive a Pelican Ring as a souvenir.

You may only receive your award while the results are being announced, so be sure that you are here on time!

Retrieved from "https://ffxiclopedia.fandom.com/wiki/Fish_Ranking?oldid=1492506"
Community content is available under CC-BY-SA unless otherwise noted.