Start a Wiki
watch 02:27
The Loop (Games)
Do you like this video?
For the Trust Magic version of this NPC, see Trust: Fablinix.

Fablinix or "Fab" is a Goblin whose diaries are chronicled in A Little Goblin's Adventure. He appears in many Special Events, but rarely serves a major role.

His diaries have the following Earth publication dates:

Fablinix also wrote two "Life in Vana'diel" articles, one previewing Besieged and another for Assault.

He encounters the following characters:

Year of the Bird appearance

His first official appearance was in the Year of the Bird New Year's Event, where he and other Goblin Riders dug up cards in the area.

Fablinix once again aided the Goblin Riders in digging up cards during the starlight Celebration 2010 event. He appeared in South Gustaberg.

Fablinix had his own dialogue separate from the other Goblin Riders:

"This chocobo riding is more painful than it looks. I think I'm starting to chafe."
"Would somebody explain to me why we're collecting these things again?"
"I wonder how much I could get for this at the local pawnshop..."
"Lookin' for cards in all the wrong places.♪"
"Digging holes in the dirt... Yeah this is my idea of excitement" 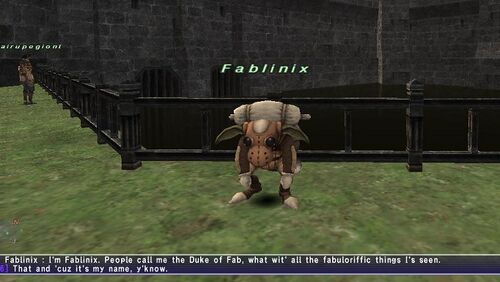 Retrieved from "https://ffxiclopedia.fandom.com/wiki/Fablinix?oldid=1674291"
Community content is available under CC-BY-SA unless otherwise noted.