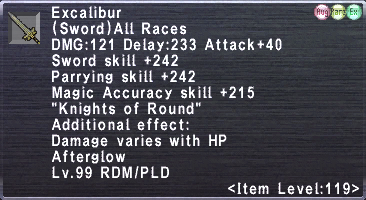 Resale Price: Cannot be sold to NPCs.
Oboro will upgrade this to Excalibur (119-3) for qualified players in exchange for 1 chunk of Pluton.

Upgraded from Excalibur (119) via:

As Arthur lay dying, he tells Sir Bedivere to cast the sword back into the lake. Before the sword strikes the water's surface, the hand of the Lady of the Lake reaches up to grasp it and pull it under. Arthur leaves on a death barge with the three queens to the Isle of Avalon, where as his legend says, he will one day return to save Britain from a threat.

The sword is sometimes called Caliburn, or in Welsh Mythology, Caledfwlch, or Caladbolg.