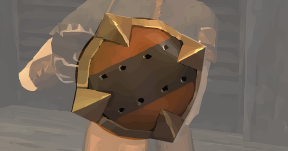 Escutcheons are shields jointly developed by synthesis guilds and the inventor's coalition which draw forth the true craftsmanship skills of players. If you have trouble remembering how to spell it, just think "Escutch me please".

Escutcheons are improved by meeting objectives laid out by each guild's guildmaster.

Please be aware that this questline will not appear in your quests menu and, as such, the stages of it will appear on this page, rather than having their own pages in the wiki.

Introduced in the February 2017 Version Update.

It will probably take between 150-200 synths to reach 100.00%, dependent on how many times you meet these criteria, so ensure your Ephemeral Moogle is well-stocked in advance!

After synthesizing the ecu with crafter's crystal, camphor and 2 mythril screws, it has +1 (craft) skill, and no longer has a reduced craftsmanship value.

Talking to the guild master, you are told to report success to Mewk Chorosap again.She comments on the quality and says she needs to consider the next step for a day. She leaves the ecu with you.

Sometime after that, when you return, she apologizes for the wait and tells you you need to craft the ecu again several times to improve it's quality. She borrows your ecu and returns it to you, now with Craftsmanship: 0.0%.

She sends you back to the guildmaster.

The titanium frame is a reward for a new records of emminence quest: Guild master's request 1.

For clothcraft, this requires synthesizing a weaving set 64, 12 times. The recipe is the same as for a crafting set 64:

To obtain the craftman's crystal, as before, you are told to craft with ecu equipped until it reaches craftsmanship 100%.

Retrieved from "https://ffxiclopedia.fandom.com/wiki/Escutcheons?oldid=1732087"
Community content is available under CC-BY-SA unless otherwise noted.