Use a Demolition Automaton to destroy the 5 shipwrecks.

Very easy Solo as 99BLM/49RDM pulling one imp at a time to the Shipwrecks and using AoE spells near them. BLM geared in 117 RoE gear. Redenius- Valefor 2-20-15

An extremely fast clear can be done on GEO or Mage/GEO. Grab one imp, and proceed to -ra the imp next to the 'shipwreck.' A wellgeared SCH99/GEO can take each out with 3 blizzaras. There are also plenty of imps flying about. Did the assault without even bringing out the demolition atomaton until after all 5 shipwreaks were destroyed. Had to just talk to npc twice afterwords.

For very fast clearing, a good job combo would be BLU/NIN, a form of refresh (RDM preferred over BRD, since RDM can also main heal), and BLM. Rather than using AoE weapon skills (as suggested below), drag a nearby imp toward the wall, and have the BLU/NIN solo the imp. Meanwhile, the BLM should focus on using AoE *-ga spells -- if the imp is close enough, the spells will damage the walls, and destroy them faster. If the crab pops while the imp is up, just sleep the crab, and then use the crab, like the imp, to do AoE spells. RDM should be the automaton controller and keep it hasted and cured. BLU and BLM stun as necessary to prevent sleepga.

We actually had WHM/SMN, MNK/NIN, BLU/NIN, BLM/WHM, and BRD/WHM and cleared it with around 15 minutes left to spare. As the BRD, I just used double ballads on everyone. The WHM kept the automaton hasted and rarely had to cure anyone else (hence BRD and WHM can be replaced by RDM). Bring echo drops for a guaranteed win -- Boogers on Hades.

To clear within 20-25 minutes, all party members need poison potions, echo drops, and a leveled dagger skill for Cyclone (i.e. SAM/NIN is very good, although NIN/SAM, THF/NIN, and WAR/NIN will work), or an staff skill (i.e. PLD/SAM or DRG/SAM) for Earth Crusher. Both AOE weaponskills are magical, therefore they cannot miss. Position all melee with back to the shipwreck and pull an Imp to that shipwreck. If possible, use Cyclone on the Imp - it will do damage to the imp and approximately 50-125 damage to the shipwreck if the imp is positioned correctly. Poison Potions are required due to the fact Imps will use Sleepga a lot (it pulled it off at least 6 times). When imps in that area are dead, send in the automation and the healer should rest MP. (Never send automation in if you're still fighting imps unless time is short.) When crab pops melees can cyclone the crab (it will always hit the shipwreck). You will need at least 3 melee and a healer (with healer controlling the automation). There should 1 to 2 imps pops around each shipwreck. When clearing shipwrecks, start with the one furthest east, then work your way west. The dangerous part is going back to the NPC when all shipwrecks are down, as the Imps will have repopped and got longer than normal line of sight aggro than the average Imp (also, you are likely moving a long distance back). Imps can be gravitied and bound, or put down with lullaby at this point - your main goal is to get the automation and the person that controls the automation back to the NPC alive.

To make the best possible trip, avoiding as many imps as possible, follow this pattern: 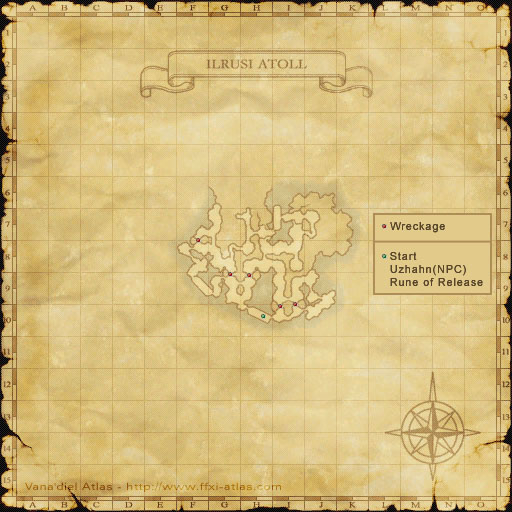