Resale Price: Cannot be sold to NPCs.
Oboro will reforge this to Death Penalty (119-2) for players with Template:Key ItemScintillating Rhapsody using 300 chunks of Beitetsu. 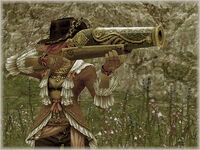