Start a Wiki
watch 02:32
The Loop (Games)
Do you like this video?
Dalzakk (S) refers to an NPC in the Shadowreign era. For current Vana'diel time, visit Dalzakk. 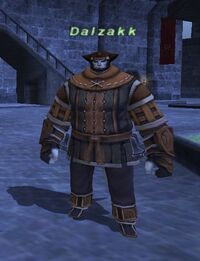 Ahhh, the wandering monk, said to have been trained in hand-to-hand combat by the legendary-wary Oggbi himself. He's known far and wide for his adventures and exploitarus. He can be seen running about Sauromugue Champaign as part of his daily regimen. He's a sucker for high morale, and can barely contain himself once the conversation-wation turns to the topic of war. They say battle fever is contagious, you know. And he's always willing to talk it up with a fellow monk. A powerful ally, indeed. Keep an eye on the heroism gauge with this one. He's an animal!

"As you can see, I still have many malms to tread before my training is complete. Perhaps one day our paths will cross again on the fields of battle. Until then, friend."

"I have rested long enough. It is time for me to make my master proud."
"Fear not. My fists will guide us to victory."

Retrieved from "https://ffxiclopedia.fandom.com/wiki/Dalzakk_(S)?oldid=1673995"
Community content is available under CC-BY-SA unless otherwise noted.