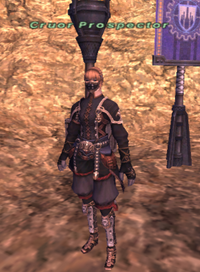 The prospector deals with all manners of Cruor transactions. You can buy armor, temporary items, and key items from him/her.

You can check your current Cruor balance by talking to a Cruor Prospector while under Visitant status.

These persist upon death, but wear off when you zone out of Abyssea. You may attempt to manually cancel these effects as well, however they will simply return mere seconds after being canceled. Upon receiving these enhancements from the Cruor Prospector, your HP and/or MP will be fully restored to the new maximum level. Note: HP and MP percentage enhancements are applied after any bonuses granted by gear/merits/food/etc; thus, these bonuses are included in the percentage calculation instead of just one's base HP and/or MP.

Status enhancements granted by Cruor Prospectors can be augmented by obtaining one or more abyssite of the Merit and/or Furtherance varieties. Two merit abyssite exist within each Abyssea Add-on (total of six), and one furtherance abyssite exists within each Abyssea Add-on (total of three), each abyssite acquired will raise the bonus value granted by the Cruor Prospector's enhancement by a fixed amount depending on the said bonus received. (Merit abyssite raise HP bonus by 10%, and MP bonus by 5% per abyssite; Furtherance abyssite raise all attribute bonuses by +10 per abyssite.)

Status enhancement received in Scars of Abyssea areas are subject to further bonuses depending on the status of the Martello Cores within the Pulse Martello. The current level of the cores determine the bonuses granted, so one may receive status enhancements which do not match the quantity of abyssite they possess, but rather exceed it by a varying margin; however, the status of the Martello cores is subject to quickly changing due to frequent Bastion battles.

Likewise, enhancements received in Heroes of Abyssea zones will receive a bonus based on dominion's sphere of influence.

Can only be dispelled by certain notorious monsters. For example Lethal Triclip from Bukhis or Dispelga from Azdaja can remove cruor enhancements.

One can opt to receive all status enhancements at once by paying 470 Cruor.

The six Abyssites of Merit:

The three Abyssite of Furtherance: