Resale Price: Cannot be sold to NPCs.
Oboro will reforge this to Conqueror (119-2) using 300 chunks of Beitetsu.

Upgraded from Conqueror (99) via the Great Axe Trials: 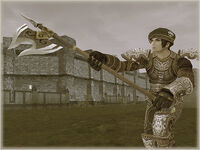 Retrieved from "https://ffxiclopedia.fandom.com/wiki/Conqueror_(99-2)?oldid=1689057"
Community content is available under CC-BY-SA unless otherwise noted.