"Colonization" refers to the variety of pioneering activities that take place throughout the continent of Ulbuka.


Players engage in colonization activities together with the support of the different coalitions to raise the colonization rate of the various locales in Eastern Ulbuka.

As the colonization rate increases, it becomes easier for pioneers to traverse the wilds and gather materials.

The colonization rate for each area can be viewed by hovering your cursor over the icons in each area from the "Colonization" section of "Region Information" in the main menu.

Adoulin has a total of six coalitions, each of which provides its own brand of support for life in the wild and various colonization activities. Those traveling to Adoulin with the desire to become pioneers and receive the coalitions' aid must first register with the Pioneers' Coalition.

Colonization is divided into two main systems: Reives, which are battles that occur at specific locations, and Coalition Assignments, in which players perform jobs for the various coalitions.

There are three kinds of reives.

Players will be evaluated on their performance after set intervals of time while participating in a reive, and will earn rewards of experience and bayld each time. If the reive ends in victory, participants will be awarded spoils based on their total level of achievement. In addition, reive participants may receive beneficial effects called Reive Momentums that are based on the cumulative achievements of all combatants.

The goal of a colonization reive is to destroy an obstacle that impedes progress into Ulbuka. Monsters lurk about each obstacle and will attack adventurers seeking to demolish the hazards.

The goal of a lair reive is to destroy dens where fiendish foes have taken root. As monsters will continue to appear if their lair is not destroyed, pioneers must swiftly deal with the threats in the surrounding area.

The goal of a wildskeeper reive is to vanquish a Naakual, one of the most terrifying fiends in Ulbuka.

Officially registered pioneers are assigned Imprimaturs, which they can use to undertake tasks from the Task Delegator located in each coalition.

The content of these assignments varies by coalition, and can range from clearing paths and procuring materials to delivering goods, preserving the peace, researching enemies, and much more. Completing a coalition assignment will reward you with a currency known as bayld. Bayld is similar to Conquest Points in that they can be exchanged for a variety of goods and services. In addition, the coalition's Edification Rank will also rise as assignments are completed.

Imprimaturs are automatically distributed to players as time passes.

A player must possess at least one imprimatur in order to undertake a coalition assignment, but may use multiple imprimaturs in order to earn greater rewards.

The edification rank represents the extent to which the coalition has advanced. This rank is calculated every hour (Earth time), and may rise, fall, or stay the same depending on player actions.

As a coalition's rank rises, it will offer more services, open additional shops, and even change in appearance.

Some shops are affiliated with a particular coalition and will offer an expanded inventory and provide discounts as their coalition's rank increases.

Ranks for each coalition may be viewed by hovering your cursor over Adoulin in the Colonization section of "Region Information" in the main menu. 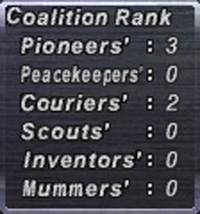 The services that a coalition offers are decided upon by a democratic vote among pioneers. A pioneer may vote once he returns to the coalition to report on a successful assignment.

The types of services offered will increase based on the coalition's appearance.

As a coalition's rank increases, the appearance of its building begins to change. The way the edifice expands is inexorably linked to the services it offers.

Certain NPCs in Ulbuka will be able to provide pioneers with a powerful enchantment known as Ionis.

The exact effects of Ionis are largely dependent on the six coalitions, with each providing different bonuses commensurate with their coalition rank.

Vanquishing monsters while under the effect of Ionis will occasionally allow the player to receive crystals.

Retrieved from "https://ffxiclopedia.fandom.com/wiki/Colonization?oldid=1432667"
Community content is available under CC-BY-SA unless otherwise noted.