What is Chocobo Racing?

The CRA (Chocobo Racing Association) racetrack is the perfect place for players to test out and show off the skills of their very own chocobos. The automated races held at this exciting venue require players to piece together a picture-perfect plan based on variables such as chocobo condition and the weather, using options consisting of orders given to their jockeys and items to be utilized on the track. But that’s not all; performing well in these races earns players gil or VCS-mint chocobucks, which can be used to purchase items or services that assist in breeding.

(You must have the Treasures of Aht Urhgan expansion in order to take part in Chocobo Racing.) For more information on chocobo breeding click here.

All Racing transactions now take place at the Chocobo Circuit.


Before participating in any races, players must first join one of the three teams (San d’Oria, Bastok, or Windurst). Each of the three regional CRA branches has its own racing team. While similar in many ways, each racing team also offers many unique services--from different items available at the Chocobuck Exchange Centers, to special races. Though players are required to select a racing team, they can change their affiliation (free of charge and without penalties) at any time.

Chocobos are registered by trading either a VCS Registration Card or a CRA Racing Form (obtained from your Chocobo Trainer) to one of the following Team representatives:

These NPCs start the Novice Circuit, Free Run, and Official races, and are only accessible via the respective entrances located in San d’Oria, Bastok, and Windurst.

In the event that players wish to change their affiliation, all records of their previous race results and chocobuck earnings will be stored at the CRA branch. While players cannot transfer those results and earnings to their new racing team, if they choose to return to a previous team, they will be able to start where they left off.

Currently, players can take part in four types of races:

*Free Runs are not available until after players complete the novice circuit under Official Races. Placing in free runs earns the chocobucks necessary for participating in official races and purchasing items at the Chocobuck Exchange Centers. There are no limits to the number of races players may participate in each (Earth) day, but the fee will increase with each race. The cost for free runs is reset at 0:00 JST and increases as follows: 100 gil » 150 gil » 200 gil » 300 gil » 400 gil » 600 gil » 800 gil » 1,000 gil. Once the 1,000 gil fee is reached, the fee for participating in further free runs will continue to increase by 500 gil until it is reset the next (Earth) day.

Rewards for placing in free runs are in chocobucks. For placing first, the player receives 5 chocobucks; for second, 3 chocobucks. Third through seventh place are awarded 1 chocobuck. However, chocobos placing last will receive no reward.

Warning - three particularly strong chocobos often appear in Free Runs, each have extremely high stats and are very difficult to defeat, nearly always coming in first place. These chocobos are:

As of this writing, choosing the View the Paddock option and checking the 3rd, 5th, and 7th slots for any of these 3 aforementioned maxed chocobos should help decide if a special item is needed or not to win the free run in 1st place.

The opponents faced in free runs are not random. Rather, they follow a very specific schedule listed below. The "C" rank race is the easiest to place, as it contains only weak opponents, none of whom use items. While the "B" rank race does not contain StarOnion, MeteorBrian, or InvincibleLeg, it does contain Tausendsassa and Sternenschweif, who wield a speed-reducing Gysahl Bomb and a stamina-reducing Fire Biscuit, respectively, which can wreak havoc on any victory plan. The the "A" rank races contain only one of the strong chocobos, making it difficult to come in first, but they also contain several weak competitors such as Boko, who are relatively easy to beat, and thus these races are worth usually at least one chocobuck. The "S" rank race is arguably the most difficult race to place in as it contains all three of the strong chocobos and most of the B-rank racers as well, almost all of whom utilize items to improve their performance.

Note that your chocobo will always be in position #1.

By successfully completing the objectives of these “mission-style” races, more challenging races will be unlocked. Chocobucks are usually required to participate in official races; however, the first race (Novice Race I) is available free of charge. *Due to the strain some of the more advanced official races place on a chocobo, players will be required to allow their chocobos a period of rest before entering another race. When participating in Official Races beyond the Novice rank, players may only race once per (Earth) day, reset at 0:00 JST. This restriction is across all three nations' racing associations; if you compete in a race in Bastok that is beyond Novice rank, you cannot go to San d'Oria or Windurst and race in any official races until the next (Earth) day.

Once you have won the CRA classic you can take part in the Pashhow Swamptrot Races. To enter, speak to the veteran CRA NPC in the Chocobo Circuit.
- For Windurst: Chualulu.
- For San d'Oria: Lafaurelle.
- For Bastok: Zagied.

For a small chocobuck fee, players can re-race previously completed official races. While prizes will be rewarded to those players who place, the amount will be considerably less than that which was received the first time. Only gil is awarded, and the gil reward is equal to 1/100th of the original gil amount received on the first run through.

The main event! These competitive races offer big rewards. Starting in the C4, must rack up "Solo Victory Points" in order to unlock higher tier races, eventually participating in the Crystal Stakes (C1).

Unlike the Official races, Circuit races are repeatable, and require a payment of gil along with chocobucks. Prizes for the race change depending on your placing, similar to free runs, but much more dramatically.

Placing first through third on the C1-Crystal Stakes race will reward the chocojockey an additional crystal stakes cup to go in your mog house.

Registration is now conducted at service counters located within the Chocobo Circuit. Additionally, if a player does not enter a chocobo into any race for over 4 weeks, half of the player's remaining Solo Victory Points will be deducted from their tally upon registering their next race.

Preparing for a race

Before running a race, players will have the opportunity to make the following preparations:

Players can visit the paddock and view the condition of all the chocobos scheduled to participate in the upcoming race.

- Give orders to the jockey

Players can give their jockeys one of the following three orders:

Have the jockey maintain a consistent pace throughout the whole race. Makes the bird maintain a pace that lowers stamina steadily, while keeping in front if possible.

Have the jockey save the chocobo's energy until the end of the race. Saves at least 25% stamina for the end, which is then used when the bird runs at Top Speed.

Have the jockey push the chocobo to its limits from the get-go. Makes the bird run at top speed at the beginning until it reaches 75% stamina. 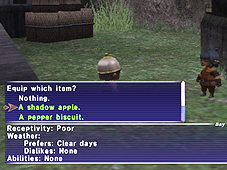 Selecting the appropriate item to equip during a race can be the difference between coming in first and coming in last. It is important to select an item that will complement a chocobo’s abilities and attributes, as well as the jockey’s orders and opponent condition. For example, jockeys who have been given the order to sprint, will often use items at the beginning of a race. In cases like this, equipping the jockey with a stamina apple will help his chocobo to maintain a quick pace for a longer period of time.

The following items can be used in all types of Chocobo race:

If you take part in a Circuit Race you can select a saddle from the following:

Once all preparations have been made, the race will begin. All races are automatic, so players only need to sit back and watch the action unfold on the racetrack.

Just as in the field, weather on the racetrack can affect a chocobo’s performance.

To make races fair for chocobos of all sizes, placing will be determined not by when a chocobo’s beak crosses the finish line, but when its saddle does.

All items equipped to a chocobo or jockey, regardless of their type, are consumable and can only be used once (though the effect of chocobo equipment will be present throughout the race).

As well as gil and bragging rights there are numerous reward on offer.

Chocobucks are a special type of currency for use at CRA-sanctioned establishments. Chocobucks can be earned by winning special races and can be exchanged for items and services used in chocobo breeding. Chocobucks are also required to participate in certain official races.
*The maximum amount of Chocobucks a player can possess at one time is 1000.
*You must spend your existing Chocobucks before you can attain more.
*Chocobucks can only be used at the branch at which they were earned.
*Training programs purchasable with Chocobucks give the message: "The programs are only available to adult chocobos still residing in the stables." 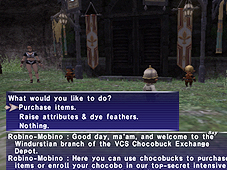 Note: You must be registered with a particular CRA branch before you can spend earned Chocobucks at a Chocobuck Exchange Center.

Note: In order to use a Chocobo race training token you must trade the token along with the chococard of the Chocobo you wish to use it on to the Chocobuck Exchange Center NPC.

The following are a few tips for racing novices:

A chocobo’s attributes directly affect its performance in a race. There are four stats, and 6 attributes

. The four stats are: Strength, Endurance, Discernment, and Receptivity. These all affect the chocobos attributes, Evasion, Accuracy, Speed, Stamina, . 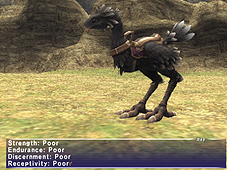 *Speed: the chocobo's current speed it is traveling at at any point in the race.
*Top speed: Set by your strength and endurance

, this is the top speed your bird could possibly reach. Dominant stat - Strength
*Stamina: Like an HP bar, this endurance and strength

effected stat goes down throughout the race, see below. dominant stat - Endurance
*Weather: Affects a chocobo’s performance in certain types of weather. Limits your birds top speed.
*Abilities: Canter increases Endurance by one level, Gallop increases Strength by one level.

Having a high intelligence on the other hand, will allow the bird to perfectly pace itself so it ends the race using its stamina to its full potential, without over working.

Retrieved from "https://ffxiclopedia.fandom.com/wiki/Chocobo_Racing_Guide?oldid=1562662"
Community content is available under CC-BY-SA unless otherwise noted.