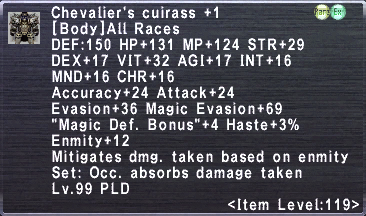 Can be stored with a Porter Moogle using Storage Slip 21.

Trade the following items to Monisette at Port Jeuno (I-8

). Your upgraded reforged armor will be ready the next game day.

A cuirass (from the Latin coriaceus, meaning made of leather, and further from the Latin word corium which was a leather breastplate), is the plate armor formed of a single piece of metal or other rigid material or composed of two or more pieces, which covers the front of the wearer's person. In a suit of armor, however, since this important piece was generally worn in connection with a corresponding defence for the back, the term cuirass commonly is understood to imply the complete body-armor, including both the breast and the back plates. Thus this complete body armor appears in the Middle Ages frequently to have been described as a pair of plates. A related item, the Corselet, is a comparatively light cuirass.