The Chat Filters section of the Config menu allows you to customise which and how certain messages are displayed in your chat log. Filtering certain chat messages helps to reduce the amount of "spam" in your chat log, reduces lag in events with many players (such as Besieged, Campaign Battles, and Dynamis), and allows you to clearly see and concentrate on important messages during battle. 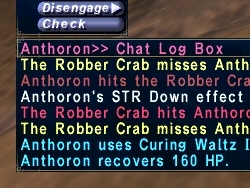 Selecting a filter will cycle through several states:

The Say, Shout, Tell, Party, Linkshell, and Emotes filter messages coming via their respective chat methods. These messages are the only ones that can be "held" in a separate chat window.

"Tell", "Party", and "Linkshell" messages cannot be filtered (removed from the chat log).

Battle messages can be filtered for several classes:

Your pets and the pets of party members are categorised in the "You" and "Party" categories, respectively. All other pets (non-party and alliance members) are categorised under "NPCs".

Special actions started on/by
Messages when a special action---Job Ability, Weapon Skill, or Magic Spell---is initiated on or by a particular class of target.
Special action effects on/by
Messages when the initiated special action takes place and the resulting effect when it is on or by a particular class of target.
Attacks by
The result of attacks by the target.
Missed attacks by
Notices when an attack misses.
Attacks evaded
Notices when a player evades an attack by a mob. This includes evading an attack through methods other than Evasion, such as Copy Image shadows and Parrying.
Damage taken
The result of attacks on the target.

The following priority order is given to chat filters: 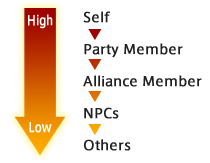 Other and System Messages

You can also filter the fishing and synthesis results of others, lot results (except for your own), campaign-related data in Shadowreign areas, and various system messages.

For example: The Shadoweye Gnat is paralyzed.