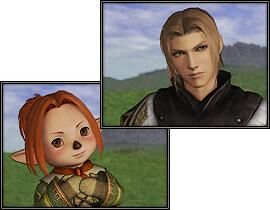 The 5 playable races are comprised of 16 character models for each race and applicable gender for a total of 128 Character Models. If that's not enough, each model can also be assigned the size of small, medium, or large for a total of 384 unique looks. Furthermore, with 3 different nations, 20 different jobs and 99 different levels, the odds of meeting someone who is your virtual twin would be 1 in 2,073,600.

There's quite a bit of freedom to choose whatever race best suits your personal tastes. While, the base stats will vary for each race, most of the impact will be on what type of equipment you wear versus what job you decide to play. It is also common for players to play several jobs, so picking a race that's "perfect" for all of them isn't practical or necessary. There are some exceptions, though. If you want to be the strongest possible melee and plan to stack Strength gear you'd choose Elvaan. If you want the most intelligence and largest MP pool for your black mage, choose Tarutaru. Finally, if you want the most rounded stats because you plan on leveling several different types jobs, Hume is a good choice. With exceptions of strength and MP because of their value in the game, there is little reason to consider a race you wouldn't enjoy as much over a race that best suits your tastes simply because of base stats; even the strength and MP argument becomes moot unless you plan to only play one job type on that character and that's an advantage that you feel you need. Good equipment and player skill, as well as the Merit system, can overcome any racial shortcomings.

When you begin playing Final Fantasy XI, you will have to create a new character. Creating a character consists of several steps, each allowing several options to customize your gameplay experience. Click anyone of the steps to jump to it's section on the page.

When you select "Create Character" from the top menu and press the |Enter| key, the character creation screen will appear. Remember that you must first sign up for a Content ID on the Final Fantasy XI top page to create an open account. You may purchase up to 16 Content IDs (in other words, create up to 16 characters). If you already have 16 characters, you will be unable to create additional characters. You must select "Delete Character" to create an empty space first.

If you have purchased a Content ID to create your first character, you should see one open slot. Select the open slot with the pointer and press the |Enter| key to begin the character creation process.

The world of Final Fantasy XI is home to many different races. Pick the type that you feel best suits you. Once you begin the game, you will not be able allowed to switch races or genders, so please read the description of each race carefully before making your decision. Gender, like physical size, is purely an aesthetic and personal choice; your base stats will remain static in terms of gender and model size; a male isn't stronger than a female, and a female isn't more intelligent than a male.

Each race allows you to choose from eight different face types. Select a face type and press the |Enter| key to make your choice.

You may select between two hair colors per face type.

Once you have decided your character's physical features, select a body size of small, medium, or large. Body size, like gender, is purely an aesthetic and personal choice; your base stats will remain static in terms of gender and model size; a large Elvaan isn't stronger than a medium or small one.

You must select a job for your character. Each job comes with a certain set of proficiencies that are collectively referred to as abilities. You will find these special abilities invaluable as you proceed through the game. You can select from six standard jobs when you create your character. You can also change your job at anytime by going to your Mog House.

The standard jobs are the six jobs you can select when you begin playing the game. You will find yourself quite weak the first time you start, but your powers will develop and grow as you proceed through the game and gain experience. Depending on your starting job, you also gain one free item or spell as a bonus.

Warriors
Close-combat specialists capable of using a wide variety of weaponry. Have a high defense rating stemming from their ability to wear many types of armor. Poor at using magic. Begins with an Onion Sword.
Monks
Martial artists whose bodies are deadly weapons. Can turn even the weakest of weapons into a destructive force. Begins with a White Belt.
White Mages
Experts in white magic that specialize in healing and recovery spells. Weak in close combat, and prohibited from using bladed weapons. Begins with an Onion Rod and the Cure healing spell.
Black Mages
Experts in black magic, specializing in offensive spells. Cannot use heavy armor that would compromise their ability to concentrate. Begins with the Stone attack spell and an Onion Staff.
Red Mages
Capable of using both white and black magic; adept at swordsmanship. However, Red Mages take far longer to master powerful spells than White or Black Mages due to their broad range of abilities. Begins with an Onion Dagger and the Dia enfeebling spell.
Thieves
Agile combat support specialists that excel at hindering enemies and stealing their items rather than attacking directly. Begins with the Onion Knife.

Final Fantasy XI is a massively multiplayer online game (MMORPG), and allows many different players to simultaneously participate in a virtual world that exists on a server; thus why a World is also commonly referred to a "Server" by players and the two terms have an identical meaning. However, there is a limit to the number of people who can use one server at the same time. Because of this, identical worlds have been created on different servers to ensure that the maximum number of people can enjoy the game. In Final Fantasy XI, these are called Worlds. As of the March 8th 2007 update you are able to select the world that you wish to play on, this applies for each new character you create, previously you needed a World Pass or a Gold World Pass to be able to choose your world . After you create a character, and log into the game, you will be able to go adventuring with other player characters (or PCs) that exist in the same World. The name of your character's World will appear in the log window whenever you log into the game. If you decide to create additional characters later, you will be prompted to choose the server in which you wish to create the character.

Once you have decided on a name for your character, you will be allowed to specify a World. (The default is "Not Specified.") The first letter of the World name must be capitalized.

Once created, a character cannot be moved to another World unless you pay $18 fee via the World Transfer Service. This service allows you to transfer up to 16 characters to a server/servers of your choice once every 90 days.

Now that you have made it this far, all that remains is to choose a nation in which you will begin your adventure. You may want to consider the relationships between races in each nation before choosing an allegiance. Once you have decided, you are ready to enter the world of Final Fantasy XI.

If you are still undecided after watching the selection demo for each nation, you can use the WIKI pages Windurst, San d'Oria and Bastok to help you decide. Also, if you change your mind later, or you just want to experience the storylines revealed by completing missions in another nation, you can switch at anytime with no penalty to your accumulated Conquest Points or your Rank in that nation. In fact, you can even collect all three of the Rank 10 furniture rewards, the nation's flag which you can hang on your Mog House wall.

As of the June 9th 2008 update you will retain your previously acquired Outpost Teleportation rights for the nation you have completed the Supply Run Missions with. You will, however, have to re-do each Supply Run Mission in order to receive Outpost Warp privileges under your new allegiance.

When you decide on a country for your character, an opening sequence will play, and after, you will receive the title New Adventurer. 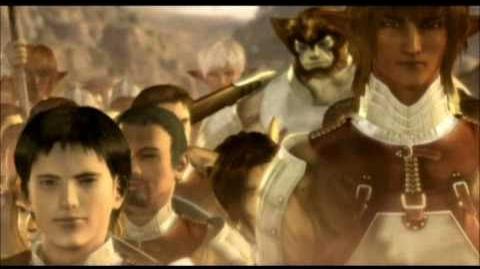 After the movie has finished, your character will appear on the street in the country of your allegiance. Your journey has just begun!