Celestial Nights--a timeless tradition born from the legends of the Far East.

A legend of two lovers, Princess Amdina and Prince Yahiko, separated by East and West across the winding great river separating their two feuding nations.

In memory of their tragic end, the people planted a multitude of bamboo stalks along each bank of the river and decorated their leaves with brightly colored strips of paper. The custom grew in popularity, and has come to mark the start of the summer festival all across Vana'diel.

Like lovers whose embrace is only strengthened by distance,

The colored streamers sway and reach out to one another in the bamboo leaves, fluttering and mingling in the early summer breeze.

Our story begins in mid-summer, in Aht Urhgan, a tale of old bonds broken and new bonds built anew.

In one of the forgotten slums in a forgotten corner of Aht Urhgan, lived a destitute brother and his sister.

He was fourteen and she was seven. Both were orphans. Although they did not share the same parents, they looked after one another in the seething mass of the city, day after day, as any brother and sister would.

Their only bread came from selling small tapestries to the foreign travelers, a common sight ever since the empire opened its borders.

That day, Nabudeen couldn't sell a single tapestry. At this rate he would never make back what he payed at the Weavers' Guild.

The marketplace was full of rumors that pirates were out marauding in force on the Bastore Sea. With travel becoming increasingly dangerous, it was hard to ignore the possibility that the tourists--Nabudeen's meal tickets--had forever been driven away.

At least the empire's mercenaries were keeping the beastmen's raids on the capital at bay. Better a pauper than a corpse, he thought.

"...Let's call it a day." He sighed as he folded up his stall. With his tapestries packed up over his shoulder, he slowly trod his way home.

"Hey, Natsume, I'm back." The apartment was quiet. She must have gone off playing somewhere. Nabudeen always got anxious whenever his sister disappeared.

Their modest, one-room lodging was of a simple Near Eastern style, with a single wardrobe for furnishing.

He reached into the wardrobe and pulled out a small box tucked away in the back. He opened the box and unwrapped several layers of carefully folded fabric, revealing an ornate hairpin. The hairpin always dazzled Nabudeen. It was in the shape of a bird clutching a large pearl in its beak, and was of craftsmanship characteristic of the Far East. It was clearly a masterwork, with smaller pearls spread elegantly around its daint yet durable form. As a young babe, his sister was found crying and clutching it close to her body.

He wrapped the pin back up and hid it deep in the bottom drawer.

"Hey, wha'cha doing?" Nabudeen's heart leaped into his throat as he sprung up and spun around. "Natsume! Don't sneak up on me like that." "I ain't sneaking! I said 'Hey!'" his sister replied. "'I'm not sneaking.' ain't isn't a word." As he corrected his sister's increasingly frequent use of the slums' patois, he noticed what she was holding.

It was a hairpin. A hairpin in the shape of a bird with a large pearl held in its beak. "Wait, what's that you're...holding...?" Nabudeen thought he might be hallucinating as his own words seemed to drift away from him.

"An old guy gave it to me." As his sister explained, she had helped an elderly foreign traveler find his way around the port and led him to the Shararat Teahouse, where they parted ways. "He said, 'It looks like I don't need this anymore, so you can have it.'" "Huh, an old guy, eh? Let me see it, I'll put up your hair." He wrapped his sister's hair into a bun and gently pushed the pin through it. The pearl gleamed silvery white against her jet black hair. "Now go wash your hands at the well. We've got dinner to make." "Okay!" They later retired for the night.

The next day, after sending his sister on an errand to the Weavers' Guild in the Commoners' Ward, Nabudeen pulled open the wardrobe drawer once more.

Just as he thought, the old hairpin and the one his sister had brought home yesterday were almost identical. He pocketed it and set out for the Shararat Teahouse.

At the teahouse, an old man in peculiar clothes was talking to the owner. He wore two, narrow, straight-hilted swords at his waist, a long one and a shorter one. Nabudeen inched closer to the counter to try to pick up what he was saying.

He began to feel dizzy as the meaning of his words dawned on him. It was just as he had suspected. The old man was from the Far East and had come to Aht Urhgan to find his daughter. Apparently she had eloped years ago.

The old man picked up a date and stared distantly at the teahouse's decorations. "Which reminds me...Celestial Nights is once again upon us." "So, will you be returning after all?" the owner interjected. "Mmm. In the end...I could not find her. Those two yearned for each other just like Amdina and Yahiko...and I denied their love, just like the old emperor from legend. I suppose this is a fitting punishment for my obstinance." "So you're decided, then?" asked the owner. "Yes. A warrior never takes back his wor--" "Wait!"

Nabudeen called out. The old man turned around, his eyes darting down to the hairpin on Nabudeen's outstretched palm.

It was shaped like a magpie with a pearl in its beak.

The old man's eyes widened. "What? I gave that to the little girl yesterday. Wait, no...I..." His voice trembling, Nabudeen told the old man the whole story. He told him how his parents had brought the baby girl home and raised her as their own. The newborn girl's parents had fallen ill on-board a vessel to Aht Urhgan and perished in a nearby hospital.

At that moment, the pearl on the hairpin began to glow and Nabudeen could hear Natsume's voice in his mind. She was crying out. A few moments later, the city alarms began echoing across the city. His blood went cold. Of all the times, why now? "The beastmen...Natsume..." Criers dashed through the square, their voices trailing behind them. "We are besieged! All able-bodied citizens are to report at once to the defense of the city!"

The old man wasted no time with questions and looked straight at Nabudeen. "Take me to her." The two of them dashed out of the teahouse and raced towards the Commoners' Ward.

"So? What happened next?" the bard Fari-Wari asked Ratihb, the teahouse owner. "Well, that old man was one of those samurai from the Far East, you know. He swooped in, cut the beastmen's hydra to ribbons, and saved the girl." "Remarkable! The hairpin was holding a linkpearl all along." "Two of a unique pair by his account. The old man called them 'heart-bond pearls'. He said he'd given one to his wife and one to his daughter, the only two in the world."

The old man had wept when he learned that his daughter not only kept the pearl with her, but had given it to her newborn.

"It must have taken considerable courage for the boy to tell the truth like that, knowing it could very well cost him his sister. Poor lad must have been heartbroken." Ratihb smiled wryly at Fari-Wari. "Well, you see..."

"Having learned everything, the old samurai decided to adopt both of them. The two are on a ship heading East as we speak."

"Aha! A happy ending after all. All the same, there's little use in denying that adventurers have become a rare sight these days. This city will surely get dull without them." "Are you joking!?" Quipped the older owner, who had witnessed the city's changing fortunes over each and every war since he was a boy.

"You know, just like in the old legend, adventurers are like the magpies that build a bridge for those two lovers to meet. Wherever there's a river to cross or an obstacle to overcome, adventurers will be there to build a bridge for others to follow." "Others? Who might they be?" "I mean the merchants, the craftsmen, the pilgrims--adventurers pave the way for ordinary folk to follow in their wake. Rest assured, I'm sure they'll be plenty of business for both of us in the months ahead."

After hearing these words, Fari-Wari couldn't help but let a devilish grin spread from ear to ear. 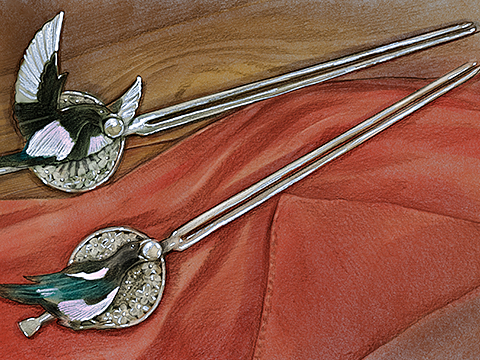 Speak to one of the moogles in the following locations to learn how to participate in the event.

This year's Celestial Nights will feature a newly designed swimsuit as a reward. Whether this is your first Celestial Nights or your ninth, all citizens of Vana'diel are heartily encouraged to participate! 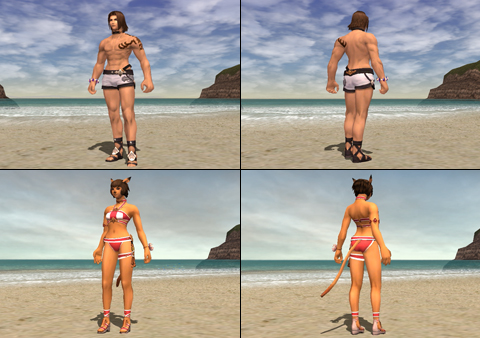