Back to Category
View source

Are you sure you weren't in a party that killed on or even casted anything remotely offensive towards a pixie? --User:Charitwo/Sig 19:58, 26 December 2007 (UTC)

They tend to go through short periods where they will not cast on players despite them having yellow/orange/red HP. It's possible they get low on MP and have to regenerate it, via some sort of Auto-Refresh. Since they cannot re-fill their MP unless they die/respawn, and thus would never be able to keep curing and Raising without Auto-Refresh, this makes sense. Imagine the scene of a Campaign battle gone wrong and the amount of Cure Vs and Raises these lil' faeries throw out - a huge MP drainer. Aequis 22:12, 27 January 2008 (UTC)

have the consequences to killing Pixies been determined? on the main page it lists one of the attributes as "Possible shared hate, leading to aggression if you kill too many." ... has that been verified? does calling for /help remove or stop hate from being gathered from fighting one (the way that's done with Tonberry)? do they stop curing / raising you if you kill one? do they re-spawn if killed? [ Kaia 22:55, 4 March 2008 (UTC) ]

Literally just watched my brother kill one. It was called "Pixie" and checked Tough to a Lv17. It dropped Stygian Ash.

There have been multiple reports of Pixies/Sprites being spotted in present zones now, with pictures. There's a thread on the forums about it here. So far from pictures I've seen, they've shown up in Sauromugue Champaign and Valkurm Dunes. Someone in my LS said before he moved his mule on Asura over to Quetz, he saw one in East Sarutabaruta, too, and that was about a month ago. --Kyrie 04:46, 19 July 2008 (UTC)

I think these track by scent. I accidently casted Repose (mistarget) in Ronfaure, and it chased me until I crossed the river. There it stopped following me, yet didn't depop. It just went back to whatever it was doing. --Bluefrostie 02:13, 18 November 2008 (UTC)

Went to release a Bottled Pixie today at the Fey Spring. Before getting there I fought a Hippogryph and he got me down to yellow HP before I killed him. Didn't bother curing to full (was DRG/WHM). None of the Sidhe would heal me at all - they totally ignored me. I have never fought a Pixie, never engaged them in battle, not carried out one single offensive action against them. Released in total 5 Bottled Pixie so far.

So I came to thinking, is this where people come to farm the pixies for the Stigian Ash (to be able to fight Ixion)? If so, do they actually learn that adventurers are bad and thus, refuse to help them, do they have a shared hate system? It seems to be endemic to the Sidhe only and not Sprites or Pixies, as they will still cure me in other areas.

I am on the Garuda server and I was wondering if people from other servers could check the Sidhe behaviour and report back here, that we might collate it and learn a bit more about them. Really interesting stuff. Seemingly simple things may be way more complicated. -- Aequis 18:34, 15 August 2008 (UTC)

I encountered this same problem while on Dancer AF1. The Sidhe utterly ignored my corpse, and I've never so much as touched one or been in a party that has. I'm leaning toward either your hypothesis, or that Sidhe just don't cure anybody. However, the AF quest also made me wonder if perhaps the predators that the Pixies fear are the Hippogryphs lurking right outside their home. The Hippogryph family page implies that they can't be found in the Grauberg area in the present, but perhaps they drove the Pixies into extinction first? --Linoth 19:15, 20 October 2008 (UTC)

Pixie hate is not yet confirmed to exists, the reason is probably either Sidhe don't cure often or they where in a cool down period. -- Mio-Raem 04 Nov. 08

Cooldown from what though? I've waited around a good 10-15 minutes following one Sidhe at yellow / red HP and it wouldn't cure me. Didn't cast any other spells and no-one else was there. It's probably safer to say that Sidhe just don't Cure or Raise at all, and that releasing Bottles Pixies just makes pixies more inclined to appear in present zones (I imagine it takes a LOT to make one appear). -- Orubicon 20:22, 4 February 2009 (UTC)

From their behaviour in a Campaign battle, I've seen all of the restorative TP moves faeries do are in fact AoE. Is it okay to update the separate pages with this info, or just make a note abilities are AoE in Campaign? -- Aequis 11:42, 24 August 2008 (UTC)

I was watching over a BLM duo in Vunkerl Inlent [S] and one accidentally hit a Sprite with a -ga spell. The duo attempted Elemental Seal Sleep 2s on it, and when that didn't work, they dropped their level sync and called for help. A 71 and a 75 BLM with Elemental Seal was unable to sleep it with any Sleep spell.

I was doing campaign just now, and Titania and her Faerie companions were all intimidated by Shadowhand her undead shadows. Since shadowhand is undead, that'd make Pixies arcana-type mobs. Pictures: [1] and [2] --20:25, 25 April 2009 (UTC)

While I haven't done the experiments to decide whether these are Arcana or not, they seem to count somehow as Elementals, too. A friend of mine had Trial 1701 active on his Magians staff (defeat 150 elemental-type mobs during Lightsday or Light weather), and he got kill credits during Lightsday in Abyssea - La Theine on Farfadets. 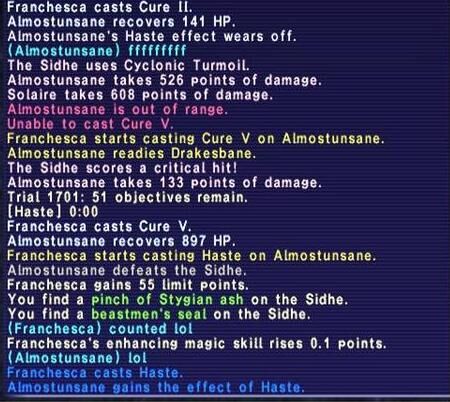 The Sidhe in Grauberg also counted for the same trial. It does make sense, though. When doing the VNM for the Pixie path, the T1s are Elementals. And all the mobs of a particular path are of the same superfamily (i.e. Aquans, Beasts, Vermin, and Amorph). Should Pixies be reclassified as Elemental? Should Elemental receive its own superfamily?--Mooffins 01:43, July 14, 2010 (UTC)

We tested again with a Trial 10 (defeat 400 Arcana) dagger. Pixies do NOT count for that trial. I don't know what all is needed to classify a superfamily, but I definitely think pixies should be changed to elementals. --Almost Unsane 23:40, July 14, 2010 (UTC)

Today i have xome to believe that Pixies are from Abyssea. It first started when i spoke to The Pixie ruler in the past. She Metions about being Sent away from her home land beacuase it has been invaded! However when you Enter Abyssea there are still pixies in there? Could this mean that the Pixies come from Abyssea? ~Shadowlina~

Pixie Hate is False: I have fought and killed HUNDREDS of these things over the years, and I have never had pixies stop curing me. I think pixie hate is just a rumor started by fools. The Stygian Ash that you're carrying around after you kill them will however cause them not to cure you. Why do I fight them? Because they are the easiest and best way to skillup, you can afk, go watch a movie, play some racket ball, go for a cruise around the world, come back and you're skilled to the max. They do very little damage, and you do very little damage to them and they cure themselves with their infinite mp pool. I have never released a bottled pixie either, so by all accounts they should never cure me, but they do all the time, you can kill 10 walk over to one and they'll still rush to your aid. I used this to skillup many weapons, all my automaton frames and it worked great. I personally tried not to kill any, but sometimes things happen when you go afk. --Hakrev (talk) 16:31, October 13, 2012 (UTC)