there is a 4th type, but i'm not sure it needs to be listed here, i dont know, maybe.

i commonly hear them refered to "oops" moogles. dev's put them in to warn players when something is broke, and they know about it.

for a short time, you could buy multiple copies of the bibiki bay map key item, until they could fix it, they stuck a "oops" moogle next to the npc vendor that said something like "dont buy more than copy of the bikiki map kupo!"

for a short time, the new escort quest in bastok markets with the brother and sister was broken to the point where it would crash the game if you talked to the sister (good job there guys lol), the removed the sister VERY fast, and replaced with a non crashing npc. but the quest still didnt work. until it was fixed, there was a "oops" moogle next to them, that said like "the quest <insert quest name> is broken right now kupo"

i didnt actually see this one first hand, but personally know people who did. one of the new BCNM was broken, a moogle appeared in the waiting area and let people know that the BCNM in question was broken, and they should do a different one until it was fixed.

Are the moogles that tell you when the Auction House is not working the same as "oops" moogles?

And what about those "glitch" moogles? I have seen them in Northern San d'Oria, Southern San d'Oria, and Upper Jeuno. They had the same options as a nomad moogle(I think), but had the model of a normal one. Also, there is that moogle in Port Jeuno which is similar, but I have only been able to see and/or target it, and it would vanish quickly.

i have seen the "glitch mooge" in upper jeuno as well, next to the cathedral, facing the mog houses. it vanished when targeted. Rhionhi 21:52, November 9, 2012 (UTC)

What about Festive Moogles they were added in for players to talk to after coming back from the live events (or while at it o.O) to get items like the moogle rog I think. but there back now for the Harvest event but can't see a use for em (Port Sandy/Bastok by the MH, not sure where in Windy) 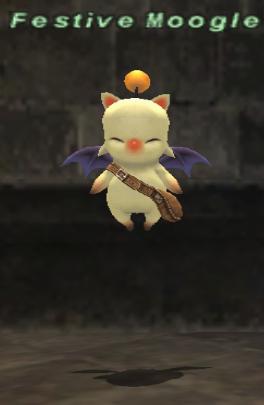 They're back for the TGS probably (Tokyo Game Show). Wasn't the Nomad Moogle Rod the reward for the thing versus Curilla/Ayame/Prishe/Shantotto? --Jopasopa 11:40, 25 October 2006 (EDT)

I don't the column for satchel access is requred. It can be accessed from every zone anyhow the moogle does not provide the ability. There is simple a shortcut on the menu.

I don't the column for satchel access is requred. It can be accessed from every zone anyhow the moogle does not provide the ability. There is simple a shortcut on the menu.

Kind of like saying a program isn't installed just because the icon is not on the desktop.

Retrieved from "https://ffxiclopedia.fandom.com/wiki/Category_talk:Moogles?oldid=1417174"
Community content is available under CC-BY-SA unless otherwise noted.