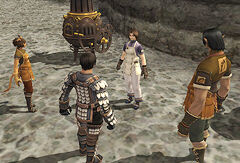 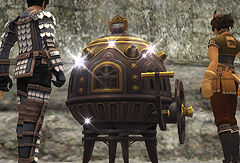 Synergy is an advanced form of synthesis wherein up to six players, each with unique skills, cooperate to create a single item via an apparatus called the "synergy furnace."

There are numerous differences to be noted between synergy and traditional single-player synthesis, one of them being the maintenance of elemental balance within the above mentioned synergy furnace. Synergists-to-be, take heed! Being a new field of science with numerous theories yet unverified, synergy is not a risk-free undertaking, and practitioners are advised to steel themselves for the occasional mishap.

Synergy is a special craft skill used in combination with other skills to etch slots for Evolith stones onto weapons and armor, and to attach said Evolith stones to those slots. It is also used to craft a variety of items, both new and old.

Synergy is not governed by a guild, and as such there are no guild tests or guild points; however, the Synergy Engineers can provide many services, including selling you fewell and other synergy supplies, training your synergy techniques, and exchanging cinder for various synergy-related items.

How to Get Started

Synergy Crucible from a Synergy Engineer.

The synergy crucible serves as the receptacle for different varieties of elemental "fewell," the source of power for furnaces. The Synergy Engineer will supply you with 99x Fewell of each element at no additional cost. You may obtain further fewell in exchange for 100 gil, or by trading an elemental Fewell item for 50x.

See also Synergistic Pursuits if you began the process to obtain Synergy access, but didn't complete it, before 2012.

1) Prepare ingredients for the recipe.

Recipes corresponding to a character's synergy skill level can be learned by talking to a synergy engineer.

Synergy is a joint activity that requires the cooperation of other players. The party leader should seek fellow synergists with the right skills needed for a particular recipe and invite them to join a party.

Check your synergy crucible's current supply of elemental fewell by either examining the synergy furnace prior to depositing the ingredients, or by speaking with a synergy engineer. If required, synergy engineers can replenish your store in exchange for gil (1 fewell unit replenished costs 100 gil). Alternatively, it is also possible to directly replenish the crucible using either crystals (each crystal gives one fewell unit of the crystal element traded) or the new synthesizable item version of fewell (each orb gives 50 fewell units, alchemy skill required to synth yourself). Depositing such items directly into the furnace will affect only the fewell supply of the character whose synergy crucible is currently installed.

4) Claim usage over a synergy furnace.

To use a communal synergy furnace, you must first lay claim by examining it. At this point, you will be allocated a period of time to deposit the ingredients and commence the synergy process. When this has been done, your group will have exclusive access to the furnace until the synergy process is complete.

Only the claim-holding character may deposit ingredients into the furnace. Similarly, at the conclusion of synergy, the resultant product will be obtainable only by that character.

Now comes the most invigorating and rewarding part of the process: the operation of the synergy furnace itself. Throughout the course of synergy, players must keep a close eye on the balance of elemental concentration, internal pressure, the build-up of impurities, and furnace durability. Seamless teamwork and timely application of synergy techniques is the key to success.

- Note that even someone who has not completed the key item quest can participate in a party member's synergy attempt. If you need a particular player's craft skill to complete a synergy attempt, there is no need to make sure they have synergy skill unlocked, they can still help and participate (though they cannot get skillups if they have not done the quest.) You will use the actions below in combination to operate the furnace to perform synergy. Note that all party members involved can operate the device simultaneously. Be careful that multiple party members don't unintentionally perform the same action at the same time (e.g. adding too much fewell of the same type). You may wish to communicate ahead of time which party members will perform what actions.

This is not a complete list of actions. Certain items may grant otherwise unavailable abilities, and new abilities may become available in the future. Any successful furnace operation can yield skill-ups, regardless of whether the action has any fewell cost.

Available to people with Upgraded guild Smocks equipped while using the Synergy Furnace.

Available to people with the guild Cuffs equipped while using the Synergy Furnace. These abilities act like like an extremely accurate thwack- only usable during an explosion with a high likelihood of success.

Overload
As impurities build up, the risk of overload increases. Keeping impurities below 30% will generally be enough to prevent overloads.
If an overload occurs and Thwacking the furnace does not correct it, an explosion will occur that causes a loss of elemental power, deals moderate damage and cause side effects:

These effects will wear off after a few seconds of not interacting with the furnace, or they can be removed normally with the appropriate -na spell where applicable.

Leaking
Another complication that can occur is a leak. The furnace will emit an aura with the color of the element. When this happens, elemental power is gradually diminishing while the elemental power of the strong element is increasing. (Earth leak lowers earth power, and increases Wind power)
Leaks can be fixed by feeding the element weak to the leak. If Earth power is leaking, feed it Lightning power until the leak stops. Like Thwacking, fixing a leak does not work every time. Expect to feed at least a few fewells to fix the problem.

Every 5th skill level, you will be able to train your ability in different aspects of operating the furnace by speaking to any Synergy Engineer. As you advance in level with each skill, you will be able to perform that furnace function more effectively. (Disclaimer: Much of this is untested):

Feed Fewell: This has been reported to increase the rate at which combustion improves (higher chance of getting more power per fewell fed).

Thwack Furnace: The chance of preventing an explosion when this action is used will be improved.

Operate Pressure Valve: The amount of pressure relieved will increase.

Operate Safety Lever: The impurity ratio will decrease more when this action is selected.

Repair Furnace: Your efforts to repair the furnace will be more effective.

Recycle strewn fewell: the percentage bonus to the amount of cinder received will increase.

Cap for each ability is level 5 (Thus, you will not be able to max every ability).

When you think you've achieved a finished product, select End Synergy to complete the process (You will receive a message when it's a good time to end). Check the furnace again to retrieve the item. The following results can occur:

If Synergy is successful, you will receive cinder, explained in detail below.

After either a successful or failed attempt, check the Synergy Furnace again to claim your items. If you forget to retrieve the items after any attempt, you can claim them by checking any Synergy Furnace in any area.

One of the key features of Synergy is the ability to modify certain armor sets. Starting from three craftable armor sets, each individual piece can be recolored to express different evolith slots, as well as specialized towards specific jobs.

Pigments
Each pigment allows different elements to be etched for evolith slots.

Aptants
Aptants are used to specialize a piece of armor towards certain jobs, or to revert that specialization.

See the bottom of this page for a list of known etching recipes.

To find out of equipment is suitable for evolith slots, trade it to a Synergy Engineer. You will receive one of 4 different responses:

To etch slots for Evolith into equipment, simply claim a Synergy Furnace and trade the item to be etched along with one of the following: Mordant 15, Mordant 30 Mordant 45 Mordant 60 or a Mordant 75 as appropriate for the item to the furnace, and complete the synergy process.
Getting a "Smooth Synergy" message will usually etch the maximum size for a slot, while normal results are randomly decided (although never below 1 or above maximum).
"Smooth Synergy" can occur if the elemental balance is not optimal, but the result will be the maximum value of the reduced range. (If the normal max is 6, an imperfect smooth synergy could result in 2~5, with normal results ranging 1~3.)

Most items not created via synergy can only take a single evolith socket. Many of the new items released with the Synergy update can take two or three. In such cases, sockets must be etched one at a time- each item has a set type for each socket, and a set selection of elements are available for each socket.
Each socket is more difficult to synergize than the last, because you need to add the previous slot to the elemental balance.
Example: Shikkoku Togi with <[1]TriangleUpFilledEarthEarth

When two slots share the same element, such as [1] and [3], the difficulty for slot 3 changes:
Example: Shikkoku Togi with <[1]TriangleUpFilledEarthEarth

60
As you can see, the earth element requires only 60 instead of 80, but as a penalty the element strong to earth (wind) is added to balance1 it.

However, when the 2nd slot element is the same as the penalty element for the 3rd slot, no additional penalty is added!
Example: Shikkoku Togi with <[1]TriangleUpFilledEarthEarth


1: The amount of wind energy (60) added far exceeds expected value (20), making this particular alignment much more difficult then the other two examples. It is most likely a bug, and should see a fix coming March update.
Majestas and Sarissa share the same problem, but how the bug affects a Light

Sarissa is not known at this time.

Once etched, elemental type on sockets cannot be changed. If you want to change it, or max out a previously unmaxed socket, you will have to remove them. To remove etched sockets from an item, simply include a Revertant or Revertant Singulus with the item instead. Revertant will remove ALL sockets, while Revertant Singulus will only remove the last socket. Any Evolith present in the removed sockets will be lost.

Evoliths can be replaced without having to re-etch the entire item as long as the new evolith matches an existing slot. An Ebur Tam with <[1]TriangleUpFilledFireFire

6> will always fit an TriangleUpFilledFireFire

-evolith on the [1] slot, wether the old evolith was stronger, weaker or had a different effect (such as TriangleUpFilledFireFire

Etching is only available on certain equipment. In general, the following cannot be etched:

Equipment that CAN be etched is generally limited to a handful of armor sets and weapons, often only one per category in a given level range. See the Etching recipes below for a detailed list.

(using Tatter, Scrap or Abdhaljs's Honor synergy) is similar to etching gear, with some of the resulting augmented gear resembling gear that can be obtained from Treasure Caskets in Abyssea, gear bought from Dominion Sergeants, and gear augmented through elite training regimes' Field Parchments.

Equipment that CAN be augmented is generally limited to a handful of armor sets and weapons (currently). See the Augmented recipes below for a detailed list.

Successful synergy attempts will yield ponzes (Pz) of cinder for all participants involved in a synergy attempt. The Collecting strewn fewell furnace operation will grant a bonus to the amount of cinder received if successful. You can accumulate a maximum of 10,000 Pz of cinder- upon reaching this amount, any further cinder received will be lost. Cinder can be exchanged at any Synergy Engineer for items used in the etching of Evolith sockets (Some of these can also be purchased with gil if you lack cinder):

A
B
C
D
E
Next Last
Deutsch Français
Community content is available under CC-BY-SA unless otherwise noted.