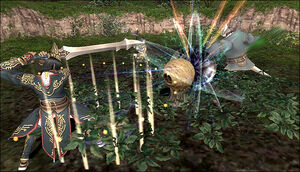 Colonization reives involve clearing obstacles from the path. Victories in these reives allow players to access deeper areas in Adoulin.

Wildskeeper Reives respawn 3 hours after their last defeat. During Wildeskeeper Reive Campaign - Plus, the respawn time is reduced to 5 minutes.

Wildskeeper reives will undergo the following changes for the duration of the campaign.

- The required fame and bayld cost of The key item required to participate will be reduced.

- The respawn times for the following notorious monsters will be reduced.