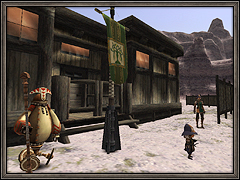 The purpose of Garrison is to defend an outpost from attacking beastmen with up to an alliance of adventurers. The beastmen will attack in 4 waves; each wave consists of a variety of jobs including melee, mages, and ranged attackers. The final wave will include a beastman boss.

To start a Garrison quest, you need to find a unique rare/ex item in the region to participate in its respective Garrison, and then trade that item to the Conquest Overseer (Outpost Guard) at the region's outpost (see below). Only one item is required for each Garrison run. Anyone can participate in a Garrison, but only Rank 2 or higher citizens of the nation controlling the region can trade the item to the outpost guard and initiate the event. After trading the item to the guard, he will inform you about an attack on the outpost; your job will be to wipe out the invading force while keeping as many NPCs alive as possible: the more NPCs that survive, the more treasure earned.

Upon initiating the Garrison, one NPC will spawn for every party or alliance member participating. A wave of enemy mobs will then spawn and proceed to attack the NPCs (who will also fight back). After defeating all of the mobs, there will be a short delay before the next wave spawns.