Introduced in Seekers of Adoulin, the Delve battle system contains some of the most difficult battles that Vana'diel has ever seen. The primary rewards from Delve, however, are often the best equipment obtainable by far. Delve is a multilayered system that consists of farming pop and entry items, defeating individual notorious monsters with no time limit in field battles, and defeating multiple normal and notorious monsters in an instanced area known as a Fracture which culminates in a terrifying boss battle.

In order to participate in Delve Fractures, the following must be met:

Field-based delve battles take place in outdoor areas which correspond with the locations of the seven Naakuals. Event-related items involved in each area are distinguished with the color corresponding with the element of that area's Naakual. Delve Fractures take place in Cirdas Caverns (U) or Yorcia Weald (U), and are entered at Veils located in each field area. All players in the alliance and anywhere in the entry field zone will be taken into the Fracture upon entry.

Each area is considered a separate path and has progression independent from the others. Within each delve area there are two levels of combat: Notorious Monster Combat and Boss Combat. In order to progress to Boss Combat, a group must defeat all five unique notorious monsters either outside in the Field or inside a Fracture.

The reward structure in Delve is unique in that all equipment can be obtained in two ways: either a direct drop from notorious monsters/bosses, or purchased from Forri-Porri @ Western Adoulin (I-10 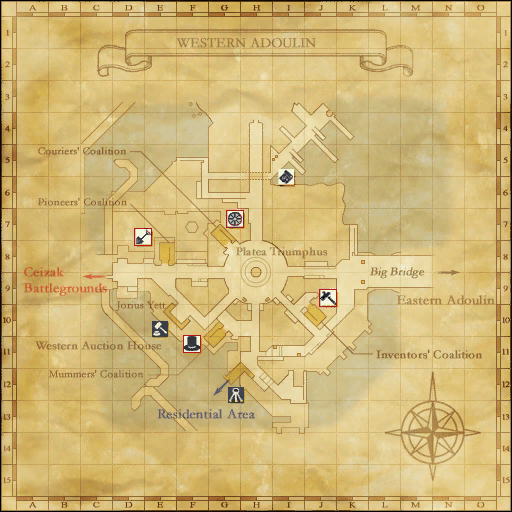 ) with Mweya Plasm (which can be collected in various ways), as long as a notorious monster which can drop the item has been defeated at least once. Additionally, the three primary sets of Delve armor can be diversified and upgraded in stages by Benjamien through a set augmentation system by utilizing Airlixirs, also obtained through Delve.