The process of chocobo raising begins when you trade a Chocobo Egg obtained from a shop or battlefield to a VCS chocobo trainer (located in the stables of the three starting nations).

Each egg is encoded with its own specific genetic information, and some players may come across an extremely rare variety.

You won’t be able to tell the attributes or coloring of your chocobo until the egg hatches.

Note: You cannot trade another egg to a chocobo trainer once the chocobo raising process has begun. Also, the process of raising a chocobo must be continued in the nation where the egg was traded.

Adventurers will work with a VCS chocobo trainer to care for their chocobo. The attributes of a fully grown chocobo will depend on the treatment it receives during this time.

Visiting your chocobo and caring for it directly will create bonds of affection that cannot be replaced by even the most detailed care plan. The most important element to raising a good chocobo is loving care. Call your chocobo by its name and spend time outside together. It is also important to scold your chocobo on occasion to keep it from behaving in a spoiled manner. Also, don't forget that chocobos love to run. Take your chocobo outside and race them against other chocobos on a daily basis. This invigorates them and builds their strength.

It is not strictly necessary to provide this level of dedication; however, your loving attention will have a noticeable effect on your chocobo’s development. It is also possible to cure your chocobo of several different status ailments with direct care.

Your chocobo may obtain special abilities depending on the method of care you employ. Each chocobo is limited to a maximum of 2 abilities.

You will witness various events while caring for your chocobo.

Known officially as "Chocoguys", these NPCs provide answers to questions about "Raising a Chocobo".

Caring For and Raising Your Chocobo

By the time chocobo chicks break out of their shells, they are already covered in down and can see clearly. They can even stand on their own two feet and take their first unsteady steps after a single day has passed. When chocobos still ran wild on the Quon continent, they needed to be able to run from carnivorous predators in order to survive.

Even so, chicks are still very weak, and require a warm bed, soft food, and most of all, loving care. This is why the Vana'diel Chocobo Society contacts the chocobo's owner immediately after it hatches and asks the owner to give the new chick a name. The chick's name is always used while it is being cared for in order to create a stronger bond between owner and chocobo. Some names are fairly common, as they are often passed on from parent to chick. Many owners also tend to reuse the names of chocobos they have cared for in the past.

Care for your Chocobo

This is where you select your Personal Care options for your chocobo.

Set Up a Care Schedule

This is where you select Programmed Care options for your chocobo. The default care plan is Basic Care (7 days).

It is possible to create 4 consecutive care plans for your chocobo. 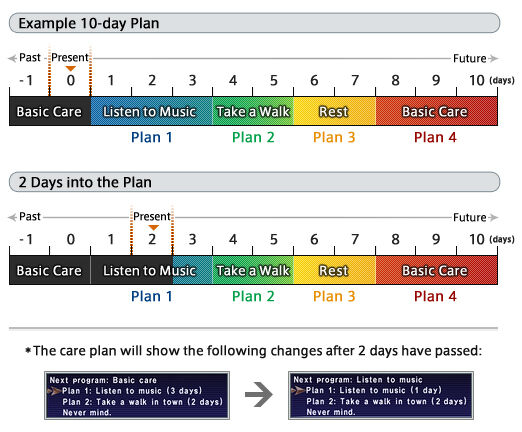 The chart to the right is an example of a 10-day plan consisting of:

Should you choose to not implement any care plans, this is what would appear on your chocobo Care Schedule: 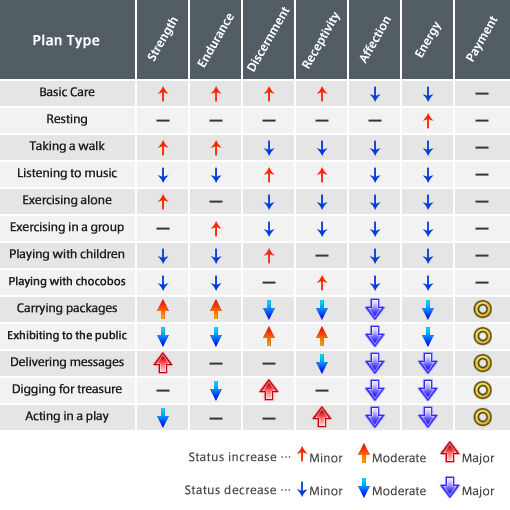 The following chart stems from an experiment by Risae on ZAM, and is hypothetical.

During the raising process, your chocobo can adopt various conditions, most of them negative, but some few are positive. The majority of these ailments can be cured with medicines that are fed to the chocobo.

Chocobos enjoy other types of greens, in addition to root vegetables such as San d'Orian carrots. The stables often use carrots as feed due to their high nutrition. Meat, such as that of the cupid worm, is also essential for building strong bones and muscles. Other than that, the VCS sometimes gathers medicinal grasses in the field for the chocobos. These grasses tend to be very bitter, however, and the chocobos do not enjoy their taste.

The VCS takes great care to provide the chocobos with a balanced diet, particularly during the growth stage of chick to young chocobo. They also discuss with the owner what types of goals they have for their chocobo, and gradually alter their feeding patterns in response.

You must work together with the Chocobo Stable employees in order to properly care for your chocobo. Feeding your chocobo and spending a bit of time with it each day will gradually build trust. You will be amazed at how your chocobo grows!

A note on feeding: Food that raises stats cannot be relied upon to raise stats as they raise by small amounts, in most tests less than a point each, and it will take a very long time to see any results from any food. Care plans and training tokens purchased with chocobucks are the most reliable at raising a chocobo's stats.

Your Own Personal Chocobo

Aside from the familiar yellow, you can raise chocobos with other colors. In addition, the appearance of your chocobo will change depending on the attributes it acquires. These changes will affect a part of the chocobo, such as its beak or legs, rather than change its appearance entirely. Depending on the method used to raise your chocobo, its attributes will be slightly enhanced or decreased. For example, some chocobos may run a little faster, while others may be ridden for longer periods of time. And, just as with a rental chocobo, it will be possible to dig with your personal mount. Perhaps you may notice a difference when digging with a chocobo that you have personally raised with love and care?

Refer to Chocobo Attributes for a more detailed look at these factors.

You can see the condition of a chocobo you are raising by speaking with the VCS trainer and selecting the option “Ask about Chocobo's condition.”

As of the Jun. 7, 2016 update, Chocobo attributes now have an effect on the following aspects of chocobo digging.

Attributes are affected by Care Plan and Chocobo Food item choices. Upgrades for physical and mental attributes can also be purchased with Chocobucks.

Physical and mental attributes are central to racing and digging. The following table lists the ratings and the points required to attain them.

Physical and mental attributes have a combined hard cap of 637 points. Therefore it is impossible to raise a bird with all 4 stats fully capped. Once the point hard cap has been reached, additional points will only cause other stats to decrease.

Because of the 637 point cap, a player wishing to have all stats as high as they can possibly be will have to settle for an SS, A, B, and C stat. No higher combination of the four stats is possible with a division of 637 points, assuming you plan on having at least one First-class stat.

On day 19, the chocobo's tailfeathers (tips) will show the chocobos final color which will become full on day 29.

Color is determined by the color of the chocobo's parents. For purchased and BCNM eggs, this cannot be known and is effectively random. Additional discussion on color can be found here.

Note: if you're in a dimly lit stable they might look grey when they are actually white. Go for a walk to confirm your disappointment.

A place where adventurers can bring their chocobos to interact with others, as well as view the conditions of the other participants’ chocobos is now open for business. When chocobos play in Kamp Kweh, there is a chance that one or both chocobos learn something from the other chocobos and raise status points, but it is only a once-per-day bonus.

Once your chocobo has reached a mature stage of development (this occurs on Day 30), it is possible to match it with other chocobos. The resulting offspring may exhibit the attributes or coloring of its parents.

(Note: If your chocobo has already been retired, trade your VCS Reg. Card to the NPC for this option to appear.)

No longer do adventurers have to rely on rental chocobos for traveling around Vana'diel! Players can call their very own chocobos from almost anywhere, at anytime.

Note: You cannot register multiple chocobos to call as mounts. Also, it is necessary to re-register a chocobo to take advantage of subsequent growth and development. You must possess a chocobo license to be able to call a chocobo.

It is possible that, if you neglect your chocobo, your chocobo will run away. If this happens, you will have to wait until it returns before it will perform any activities. The return of the chocobo may vary but can be up to seven earth days.