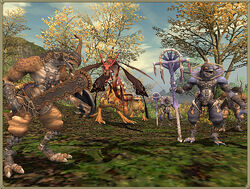 Each family also has a superfamily, which generally describes a broad class of monster. Thus, the Rabbit Family is of the Beasts superfamily. Monsters of one superfamily may possess certain advantages or disadvantages when interacting with monsters of another superfamily. To see how superfamilies interact with one another, see Ecosystems.

Certain rare and notorious monsters also inhabit the world of Vana'diel, and, if defeated, may reward the adventurer with rare and exclusive items.

-
A
Next Last
Retrieved from "https://ffxiclopedia.fandom.com/wiki/Category:Bestiary?oldid=1162255"
Community content is available under CC-BY-SA unless otherwise noted.