First, activate the Records of Eminence quest Stepping into an Ambuscade, then talk to Gorpa-Masorpa at Mhaura (G-9). To enter any Ambuscade battlefield all players in the party will need a Key Item.

Abdhaljs Seal will triple the currency rewards for a single win.

Abdhaljs Fiber are used to upgrade NQ armor to HQ, and HQ armor to HQ+2 armor. These materials are available either for Hallmarks or Gallantry.

The gimmicks of this fight all revolve around enemy proximity to each other and the visible auras this gives them. Auras on the main foes can power up the traditional Goblin Bomb to lethal damage levels. The Don will summon one of two assistants at random to throw a supercharged bomb at fixed member (usually the White Mage) of the group.

The Difficulty Setting determines which foes are present, and the behavior of the Bomber foes and the damage dealt by Bomber abilities. Also controls the timers of when Bombers appear. No Bombers will appear for the first 15 seconds after engaging on any difficulty. 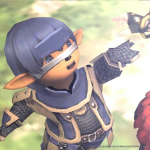