Upgraded from Carnwenhan (85) via the Dagger Trials: 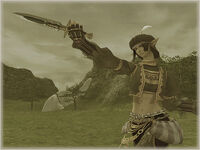