Chocobo breeding is a simple thing that does not require much from you in forms of gil and time. However, if you want a good runner or a skilled digger, you should be prepared to spend about 5k a week and 10 minutes every day. More is hardly required to get a First-Class STR or a First-Class DSC. I have found that being able to raise a top-notch chocobo is alot easier than the general player base claims it to be. As an example, i just raised a Red Chocobo with First-class Strength with the abillity Gallop purely on Azouph Greens (i used a couple of Chocolixirs for storytelling, but in the end it learned it the firsttelling on day 28~30 dont remember excactly).

Not much to say here, you dont need any carrots at all to reach first-class strength or discernment. Your main food should always be Azouph Greens. Why? It raise affection. 2 is enough to fill up your chocobo. I am not saying dont use carrots, or, i am actally. Use them sparingly when your chocobo allready have reached "Regard As Parent" affection level. There are feed for use to solve certain issues. I will come back to this later.

There are several ways to do this. You can buy them from NPC in Ru'Lude Gardens, Do quests for the Chocobo Stables (Upper Jeuno), Do ISNM3000, or what i recomend for getting the chocobo you really want; Chococards. If you want a certain color on you chocobo, this is the only sure way to go. People are often Bazaaring these outside the stables, or you can shout for them in Aht Urgan. 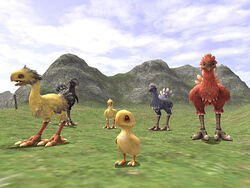 I know there's some dispute here, some claims i find straight out hillarious (like parentage have nothing to say regarding color of chick), others have some holding to them. Personally i have found that some colors hold greater chance when mating between colors. Ex: black breeding red will mostly turn out black.

When mating two of the same color, the chance of breeding a yellow is near zero. personally i have never seen it happen, and i have heard of 1 incident from a player i dont even know. Not once have my chococards from my two reds given anything but red. my friends have never gotten anything but reds from the parents or grandparents of my chocobo's. The only thing i am inclined to believe affect color outcome from such breedings are parentage color as described below.

Lets say you mate two reds who both have 1 yellow and 1 red parent. main color is red on the two targets, but theres yellow genes in them. Thus it is possible that these two chocobos produce a yellow chick. And i believe (without knowing for sure) that this has been a main factor when such incidents have occured.

Right now i am raising a blue choco. And the statement "parent color makes no difference" have failed completely. i have now sold about 600k worth of chocobo cards (which i guarantee to be red) and all of the cards have turned out to be (yep) red. The eggs have had all the different "Warmth" levels (i believe this has more to do with how careplans, mood swings and other functions during your raising of the chocobo).

I now believe solely on that the parentage genes up to a certain degree has EVERYTHING to do with you chicks color (perhaps with that static 95% fail margin as almost anything in the game has). Even honeymoon tickets seemed to have failed, because ive just chosen tickets based on which atribute i am raising on the new choco. Like i had 2 blue cards, but used the DSC plan since i wanted dsc for abillities. well, what happened was; i got high DSC to start off when the chick hatched, and the color turned out to be blue. What a surprise XD (no not really).

Make no mistake. This little piece of trickery by SE can make all the difference between your poorly bred chocobo and your first-class one. Affection directly impacts the effectiveness of your careplans. If you ignore affection, i am sad to say your chocobo will probably only make it to about average or better than average. I cannot be clear enough on this, keep you chocobo's affection on "regard as parrent" at all times. You can feed your chocobo carrots untill they flow out its nose without half the reward as a happy chocobo would enjoy. So dont go in the carrot trap. keep your chocobo fed on Azouph Greens to keep it happy, especially when having it on one of the hardcore careplans.

And i know some of you may be thinking; i wont get it to SS if i dont use carrots. well, thats bullshit, infact its so easy you will probably have like 15 days left of care-plans when you reach first-class on str or dsc. You dont need carrots, period.

When you have gotten your egg, deliver it to your raiser to start your care for the chocobo.

To breed a speedy Chocobo, you main focus is strength. Average Endurance will last you a very long time while riding it. and generally more than long enough to get to where you need to go. For abillities theres just Gallop you need to get that really affects your chocobo while riding it. This abillity is gained by meeting Hantileon on walks. Please be aware that if you are breeding a speeder, learning it abillities can prove difficult. I will go through this later in the guide.

When your choco is att egg stage, theres nothing much to do. you can watch over it as many times you want, and every time affection level increase a tiny bit. Just watch over it like 10 times a day and youre good. just make sure it hatch and you have some affection to it.

When its a chick, you should have it taking walks in town for your care-plan. take it for short walks every day, and feed it Azouph Greens until it "regards you as parent". At this point the affection drops very little with each day, so some carrots can be given if you want to. just keep the affection at maximum.

Put your chocobo on Carry Packages. This raise both endurance and strength. I will suggest this careplan until yor endurance reach average. or until it is grown up and more careplans is available. At this point you can go on medium walks. This will give you access to "compete against others" when caring for your chocobo. On a regular basis when breeding the speeder, your chocobo will get bored and restless. Have it compete against others to solve this. After winning 3 times over the spoiled black chocobo you will get access to "A happy Chocobo" story. This will teach your mount "auto-regen". This is invaluable if you want to make the most affection out of caring for chocobo opposed to feeding only Azouph Greens. But keep in mind you need discernment to be able to learn your choco skills reliably.

This is the part where your careplans really make a difference. You now have access to the hard-core plans where you get maximum boost to attributes, but also a solid hit to affection. If you reached average - better than average endurance with carry packages, switch to "Deliver Messages" right away. While on this careplan you must feed it aty least one Azouph Greens a day. This is also when you can start using the percentage plans. have a look at this:

You see the x5% plans? This my friends is the best plans for when your chocobo is at "Impressive" or higher! The reason why is obvious. Firstly look at the energy loss of the 5%'s vs those of the Hard-core plans. You will barely notice the energy loss on the 5% plans, which gives you more time to tell stories or taking walks to raise affection. This again gives you the oportunity to feed more carrots, if you are that impatient.

This is the point range your chocobo have to go through to raise attributes. As you can see the points go fairly high. starting at "impressive" (160 points) x5% = 8 points, the 5% careplans gains you chocobo as much points as the hardcore plans and this is rising as your chocobo gain more points.

If you want your chocobo to be as fast as possible in this game, you need to learn it Gallop. This requires a little bit of luck to get it done by day 64 (First-Class strength, Average Endurance + Gallop). Unless you get lucky enough to inherit this abillity from a parent chocobo. What you want to do is get your chocobo on "listening to music" until adolecense, then "Interact with Children" or "Exhibiting to the public". Keep these plans up until you get the key-item to learn Gallop from Hantileon, and until you have successfully teached your chocobo gallop. Usually you should have good enough time to still reach average endurance and first-class strength. I reached First-class at day 59, leaving 5 days left to further increase Endurance.

Oh happy day was my first thought. My chocobo will finally outrun the rentals. but what did i discover when trying my personal choco's mettle agains a rental? You guessed it. NOTHING. I dunno what SE has done here. But what first springs to mind is hard cap. Basically, if you have taken the time and put forth the patience needed to get yourself a first-class chocobo with Gallop, then ofcourse, you are to be punished.

In my test me and my friend ran cross the length of La'theine plateau. my friend on rental, and me on my first-class gallop chocobo. Without silks first time, my chocobo didnt loose or gain distance for the duration of the run. And yep, i was sad to see nothing changed with the Purple Racing Silks. basically 150 chocobucks out the window. get this if you wont make the effort to get gallop. my friend noticed a difference without gallop and first-class str. now theres no difference between the two.