Start a Wiki
watch 02:38
The Loop (Games)
Do you like this video?
Were you looking for the summoning magic spell Carbuncle, or another page with this name? 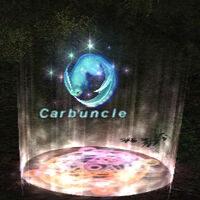 A mysterious ruby that is said to bring good fortune to its bearer. Takes the form of a small, furry creature that leads the summoner to the other avatars.

The ability to summon Carbuncle is one of the basic summoner abilities, and is available from level 1 as soon as the job is unlocked from the quest I Can Hear a Rainbow (which is centered around summoning Carbuncle from his ruby).

Carbuncle Prime, a very powerful monster, can be fought at the end of the Waking the Beast quest.

Carbuncle, originally was spelled "carbunkel", a magical creature reported in the Americas by early Spanish. They are described as small creatures, with a certain gem on their foreheads. The gems come from the brains of dragons. According to myth, dragons have inside their brain a liquid that crystallizes into a solid gem when they die. According to superstition, it is good luck to catch a carbuncle.

"Vana'diel is the world in which you live. You should see the true Vana'diel with your own eyes."
"I will extend a bridge...between the people of the present, and beings of ages past."
--Carbuncle, during I Can Hear a Rainbow

Retrieved from "https://ffxiclopedia.fandom.com/wiki/Carbuncle_(NPC)?oldid=1673733"
Community content is available under CC-BY-SA unless otherwise noted.