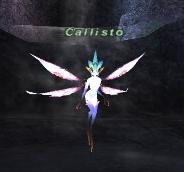 Succor to the Sidhe

In Greek mythology, Callisto was a nymph of Artemis who took a vow to remain a virgin, as did all the nymphs of Artemis. But to have her, Zeus disguised himself, according to Ovid, as Artemis herself in order to lure her into his embrace and rape her. While Callisto was bathing it was discovered that she was pregnant and then turned into a bear to later give birth to her son Arcas. Callisto is also a moon of the planet Jupiter, discovered in 1610 by Galileo Galilei. It is the third-largest moon in the Solar System and the second largest in the Jovian system, after Ganymede.