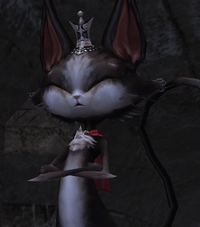 However, he is the traitor consorting with the Spitewardens of Lady Lilith.

The Cait Sìth (also: Cat Sídhe) is a fairy creature from Scottish mythology, said to resemble a large black cat with a white spot on its breast. Legend has it that the spectral cat haunts the Scottish Highlands. Some common folklore suggested that the Cat Sìth was not a fairy, but a transformed witch.

In Scottish Gaelic, Ceithir is the cardinal number four.

Retrieved from "https://ffxiclopedia.fandom.com/wiki/Cait_Sith_Ceithir?oldid=1024383"
Community content is available under CC-BY-SA unless otherwise noted.