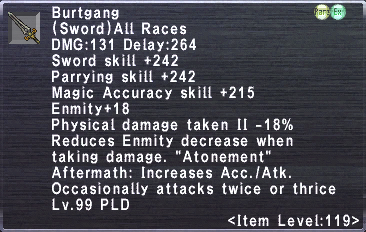 Resale Price: Cannot be sold to NPCs.
Oboro will upgrade this for qualified players to Burtgang (119-3) in exchange for 10,000 chunks of Beitetsu
Trial of the Magians:

Blutgang (also Burtgang or Blodgang) was the sword of Háma (Old English: Hāma) (Also Heimir (Old Norse), or Heime (German)), a legendary Germanic hero who often appears together with his friend Wudga. He appears in the Anglo-Saxon poems Beowulf and Widsith, in the Scandinavian Þiðrekssaga and in German epics such as Alpharts Tod.[1]