Breaking the Bonds of Fate: A Strategy Guide for Corsair Limit Break 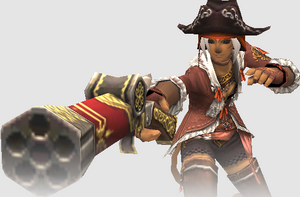 I am Nelka on Cerberus. I am currently a level 99 Mithran Red Mage and a 99 Mithran Dancer. I have been playing as a Mithran Red Mage since I started the game back in Summer 2009 and it is currently my main job. I have done Red Mage Maat and was 1/10 on him before I won successfully. I also did this guide and fight before the Seekers of Adoulin expansion was released. I will be adding in items and consumables from that expansion for those players that have come into FFXI since its release.

I have recently taken up Corsair and I wanted to make a mini-guide to the limit break in light of the fact that there is not much of guides for this limit break available, besides Mastering Chance: A Guide by Solzera and Corsair G5 Guide: By Jekyll. There is also not a lot of strategies suggested on the talk page of the quest Breaking the Bonds of Fate either. I am writing this guide to fill in that gap.

As I have said before, I am writing this one to fill in gaps and to give suggestions that might help anyone who is stuck or needs encouragement to keep trying this fight. I am also dedicating this guide to the fellow COR's out there whom still keep this job worthwhile and alive, including Xanx from my server who has given me the inspiration to keep going on Corsair despite the long tough rough with it.

I will say to those who are thinking about giving up because of losing, please know that it can sometimes take time and persistence to get through the fight. I am 1/10 on Red Mage Maat myself and Red Mage Maat resists magic spells even more than Qultada resists Quick Draw and Slug Shot. At least, you have an extremely fast fight of chances to land as many Slug Shots and Fire Shots on Qultada without having to worry about getting Asuran Fists to death. :) All I am trying to say is DON'T Give Up!

Corsair has an interesting way of surviving due to the way it deals damage. To solo Corsair well, you need to maximize your damage output without sacrificing your wallet. As I soloed and duoed my way to 70 on Corsair, I usually used Dancer as my sub because I could cure myself easier while dealing more damage. If you need guides on Corsair as a job, please look up the main Corsair job page.

If you are in need of other guides for this same fight for help in formulating a strategy to beat Qultada with, please look on the bottom of Corsair.

Assumptions to be made about this Guide

This guide is being written as a guide strictly for the Qultada fight, otherwise known as Breaking the Bonds of Fate. I am also including strategies that I have not seen used previously based on all the other information that I have read on Corsair.

I specifically chose not to wait until level 75 to attempt this fight, since this would be less of a challenge and would give me no sense of honor as a Corsair. I also felt that doing this fight at 75 or higher would not prove to me that I know Corsair well enough to finish taking it up to 99.

I am also writing this guide based on what strategy I used for the fight and am 1/1 on level 70 Corsair on May 28, 2013 with a time of 5 minutes 32 seconds and broke the time record for my server. I also have evasion fully capped for my level 70 Corsair plus fully capped Evasion Merits. I also had 10 DEX merits and 11 STR merits as well at the time I did this fight. I also went into the fight with capped Marksmanship. I am noting that in here because merits from higher levels on other jobs do actually affect your performances in these limit break fights.

Observations on the fight after the fight

For this fight, you have to consider yourself a damage dealer for the entire fight and not worry about healing yourself. This means using Slug Shot and Quick Draws every chance you get. You might want to consider using a Selbina Milk and Poison Potion in case of Light Shot or Dark Shot; however, I found that I did not need them during the fight. You want to Slug Shot every time you have enough TP to weaponskill. The goal with this fight is to get in as many weaponskills and Fire Shots as possible before Qultada kills you.

Note: You do not need to go with the HQ's in order to have a successful fight. You want to be reasonably well geared, but getting yourself broke just for this fight is not good, especially since Corsair is still pricey even if you craft your own ammo. Here is the gear I used for mine and none of the items individually cost over 60k, except for the Amemet Mantle +1 (which on my server is 100k and the NQ is well below 30k) and the Corsair AF which can get pricey depending on your server's prices. I also had the Fire Staff and Moldavite Earring already from my Red Mage, so I carry it over to my Corsair as well. The only gear you really do need is the mantle, but you can get away with some substitutes to what I had without an issue.

Main Hand: Fire Staff - the HQ is not absolutely necessary. Please do not try to use a Chatoyant Staff or a Iridal Staff if you can help it--you actually want the ranged attack and strength bonus from the Fire Staff for this fight.
Neck: Lleu's Charm - I actually spent the time to farm this myself from Mind Hoarder. For ranged attack and racc in the same slot with AGI+ to boot, this is the best neck piece I have seen around plus it is all jobs. If you can farm this to use for the fight, this piece is free and worth it. If you are unable to get a Lleu's Charm, you can use a Peacock Charm.
Head: Corsair's Tricorne
Body: Corsair's Frac
Hands: Jaridah Bazubands
Legs: Jaridah Salvars (I usually solo in these because they are better than the Corsair's Culottes and they have but for this fight the RACC+ and RATTK+
Feet (TPing/Quick Draw): Corsair's Bottes
Feet (WS Only): War Boots Ranged: Trump Gun
Ear1: Drone Earring
Ear2: Drone Earring
Ear2 (Swap in for Quick Draw/Fire Shot): Moldavite Earring
Ring1: Marksman's Ring - If you aren't able to get the Jalzahn's ring, at least shoot for this one (no pun intended). This ring costs about 5k on my server but drops from some of the more commonly done bcnm's and is one of the only RACC+ rings without sacrificing damage and the only RACC+ ring with a decent defense that you can use at this level.
Ring2: Jalzahn's Ring - I chose this ring since I had beaten ToAU mission storyline already plus I was hoping the Assault bonus on it was going to kick in for the fight. I also chose to go with this ring because it has both RACC+ and RATTK+ on the same piece, which is rare.
Back: Amemet Mantle +1 - if you cannot afford the HQ, use the NQ or the Psilos Mantle.
Waist: Commodore Belt - While this drops from Dynamis, this belt is the best balance of STR+, RACC+ and RATTK that you can use at this level for this fight. You need rank 6 for your nation and a level 65+ job to enter Dynamis.

Corsair's Testimony
Squid Sushi +1 - I used this for the accuracy this food gives.

Opo-opo Necklace 4Sleeping Potion 1 Icarus Wing - this is critical because it will instantly give you 1000TP. It also causes a medicated status effect that lasts at least 2 hours, so you will not be able to use any other medicated items in this fight.
Instant Reraise
Blink Band

Note on optional Items: Since the addition of Seekers of Adoulin, you can also consider adding consumable items that were not previously available and be able to save that stoneskin torque for another day. Some of the items to consider purchasing with bayld include: Scroll of Protect, Scroll of Shell, and Scroll of Instant Stoneskin. All of the purchasable consumables come from the Peacekeepers' Coalition.

Strategy for the Fight

Side Note: It is imperative that you do not bust on rolls during this fight. If you have to take a number that is neither lucky nor unlucky to prevent a bust, then do so.

Side Note: It is imperative that you do not bust on rolls during this fight. If you have to take a number that is neither lucky nor unlucky to prevent a bust, then do so.

The major change that makes this fight easier is the Testimonies can be used up to 3 times before you must farm a new one. This should help for those who have not yet won a G5 fight as well.

I wish you all the best as you attempt this fight!