Resale Price: Cannot be sold to NPCs.
Oboro will reforged this to Aymur (119-2) in exchange for this item and 300 chunks of Beitetsu.

Upgraded from Aymur (99) via the Axe Trials: 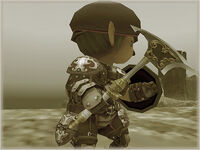 This axe, fashioned of the finest darksteel, bears the inlay of a majestic golden wave, modeled after the Kingdom of Ephramad's royal insignia. Its name allegedly derives from an ancient source and is symbolic of the inexplicable powers of influence the weapon seems to exert over others. It is said that the legendary Admiral Veydal forged the axe in an attempt to harness the power of the mighty Leviathan.