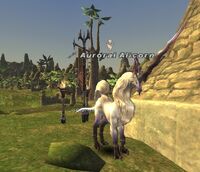 Auroral Alicorn is known to use the following abilities:

Current taxonomy teaches us that at presentaru, the monoceros family contains few known specimens. Those that are classified exhibit great horn spire-wires jutting from their majestic heads, and are either born of light, or of darkness. An influx of eyewitness accounts in recent days all point to the undeniable existence of the beastaru named Dark Ixion. Tempered like a storm and ever wary, both allies and beastman alike tend to keep their distance. The other is dubbed Auroral Alicorn and exhibits a brilliantaru shade of white and a calm, gentle demeanor. The two couldn't be more dissimilar-wimilar. Though almost never seen in the wild prior to the war, Auroral Alicorn has recently been sighted in Jugner Forest, some say nursing wounds.

Alicorn is simply another word for the spiral horn of a unicorn. Auroral is an adjective referring to the dawn or the aurorae; both being phenomena that are associated with light. The Auroral Alicorn, therefore, is meant to stand in contrast with Dark Ixion.

Retrieved from "https://ffxiclopedia.fandom.com/wiki/Auroral_Alicorn?oldid=1673468"
Community content is available under CC-BY-SA unless otherwise noted.