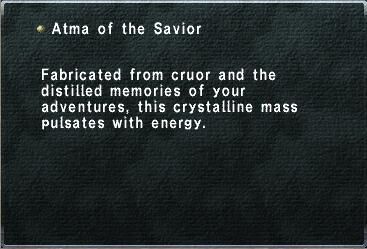 Atma of the Savior
Description:

Obtained:
100% completion of all 9 zones
Atma Fabricant in Heroes of Abyssea zones for 2000 cruor
Notes:

To unlock: obtain ALL 99 atma (only on NM), ALL 65 abyssites and complete ALL 87 quests in abyssea.
You can verify your progress at the Goal Tracker in each zone.

You must collect all cruor rewards from the Goal Tracker NPC's in each zone in order to unlock this Atma.

Retrieved from "https://ffxiclopedia.fandom.com/wiki/Atma_of_the_Savior?oldid=1346449"
Community content is available under CC-BY-SA unless otherwise noted.