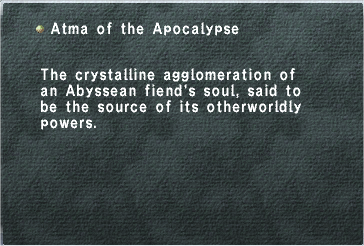 Atma of the Apocalypse
Description:
The crystalline agglomeration of
an Abyssean fiend's soul, said to
be the source of its otherworldly
powers.
Obtained:
Defeating Shinryu after red stagger

has been triggered.
The Atma is awarded upon return to the lobby of Empyreal Paradox.
Notes:

Retrieved from "https://ffxiclopedia.fandom.com/wiki/Atma_of_the_Apocalypse?oldid=1650852"
Community content is available under CC-BY-SA unless otherwise noted.