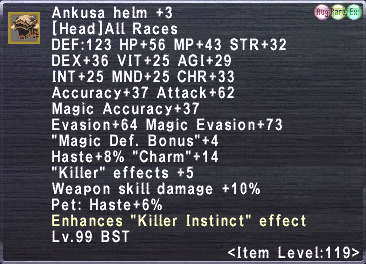 ) will upgrade Ankusa Helm +2 for players who have defeated the Wave 1 Dynamis - Windurst (D) boss as Beastmaster in exchange for the following:

Retrieved from "https://ffxiclopedia.fandom.com/wiki/Ankusa_Helm_%2B3?oldid=1708646"
Community content is available under CC-BY-SA unless otherwise noted.