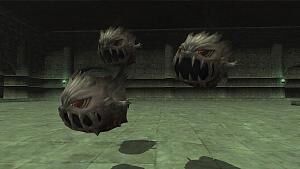 This month's V2 encounter is a relay against a series of several Bombkin. You only ever fight one opponent at a time, and when one is defeated the next will immediately appear. The relay's 'route' is determined by requirements that must be met and can force a rare golden bomb to appear and grant bonus Hallmarks.

The fight ends when a second Bozzetto Cluster is defeated.

The Difficulty Settings determines only the stats of your foes. Difficulty settings do not appear to have an effect on the odds of a Golden Bomb appearing.[1]

There are multiple 'routes' to the relay of monsters, which depends on how the Bomb and first Cluster are defeated. The most common route is:
Bomb > Snoll > Cluster > Djinn > Cluster.

The Bozzetto Bomb's size can be organized into three states. It's "Normal" size is set at the start of the battlefield, and damage of different types will have an effect on its growth or shrinkage.[2]

The next foe to spawn will depend on the size of the Bomb when it is defeated.

After any of the above routes are concluded, a Cluster will spawn. What follows the Cluster depends on how many times it is allowed to use Self-Destruct.

Up to two Golden Bombs may appear during the encounter.

Retrieved from "https://ffxiclopedia.fandom.com/wiki/Ambuscade/Battlefield_Archive/Bozzetto_Bomb?oldid=1731717"
Community content is available under CC-BY-SA unless otherwise noted.