==PLEASE EXPAND THIS PAGE WHILE EXPERIENCING THE EVENT==

The Adventurer Appreciation Campaign is currently underway and will last until Thursday, May 30, 2013, at 7:59 a.m. (PDT)

Talking to a moogle will trigger the following information to be given to you:

To receive an Undecennial Ring, talk to an event moogle in one of the three starting cities.

Note: To receive items after receiving the ring, you must wait until 12 a.m. Japanese midnight before obtaining any other rewards. You may only collect 1 reward per day or wait until the next day for a better item.

Get a Moogle Guard out of the box next to the Moogle in Windurst Waters, in front of the Timbers Tavern at (F-9), in front of the Auction House in Southern San d'Oria at (I-8), or in Bastok Markets just east of the Auction House next to the fountain (F-8). Try to take the guard twice for a cutscene with the Erudite Moogle that, in the end, turns your character into a moogle. You can find the Proctor Moogles in the same area where you get your Moogle Guard. There are 8 in Windurst, Bastok, and San d'Oria, making a total of 24 Proctor Moogles. Every Proctor Moogle asks questions which need to be solved. Once all exams of your first city are done, you are given a Moogle Guard +1 (you keep your original Moogle Guard) when you talk to the quest starter Moogle again. The second city gives you a Chocobo Shield. Completing the third gives you a Chocobo Shield +1, some Moogle Moolah, and the opportunity to talk to an Oblivious Adventurer to have something "returned." 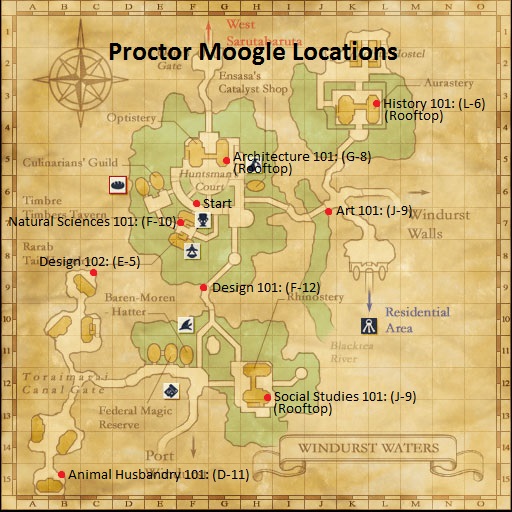 The first 5 Proctor Moogles are in Windurst Waters - North.

(G-8) On top of the Optistery - Architecture Exam - Pair the 3 pictures to the proper Manors of Winderst Walls.

(F-10) Behind Timbers Tavern - Natural Science 101 - Choose the ascendant or descendant ethereal elements. Be sure to take note of where the Moogle tells you to start and in which direction to go.

(F-12) Across the bridge headed towards Windurst Waters South - Design 101 - Pair the 3 pictures to the proper places once again. This time there are 8 possible answers.

The remaining 3 Proctor Moogles are in Windurst Waters - South.

(J-9) On top of the Rhinostery - Social Studies 101 - This one is simple. The Taru NPC in the blue hat is the 'Leader' and the blonde Taru NPC with pigtails will be the second choice. Simply pay attention to what number the two of them shout out.

(E-5) Behind the far north building - Design 102 - Once again, you're matching the 3 pictures to it's proper location. There are seven possible answers in this one.

Original guide by User:Samunai (Windurst guide was re-created by: Toranko) 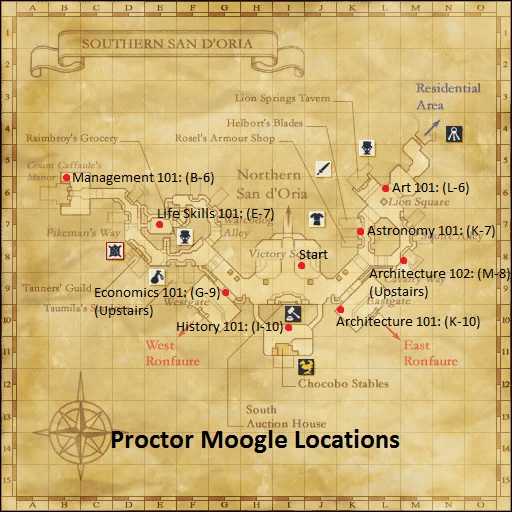 All these Moogles are in Southern San d'Oria 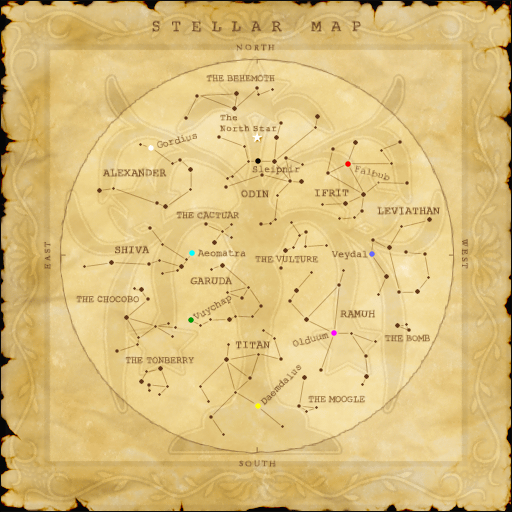 (M-8) On the balcony - Architecture 102 - Pair the 3 pictures of doors to the proper locations in San'doria.

(I-10) Across from the Chocobo Stables - History 101: - Identify the order in which the Adventurer and Cartographer Gwynham Ironheart visited the regions of Vana'diel. All the information you need to do this is on the The Collective Annals of Gwynham and Enid Ironheart. They are even in the right order.

(K-10) Across from the eastgate - Architecture 101 - Pair the 3 pictures of doors to the proper locations in San d'Oria. 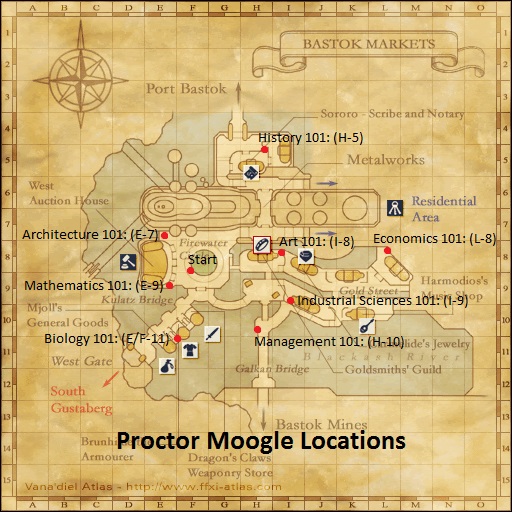 The quest Moogle is on the west side of Firewater Circle.

The Proctor Moogles are all in Bastok Markets


(I-9) Behind the west Trader's Home - Industrial Sciences 101 - Asks you to identify three of the following based on pictures: Cid's Lab, Cermet Refinery, Darksteel Forge, Gunpowder Room.

(L-8) Just north of the easternmost house in Bastok Markets - Economics 101 - Asks you to identify shops based on views of their interiors.

Esdain of Valefor's offsite (ffxiah) 100% photo-guide w/ step-by-step images of all possibilities: http://www.ffxiah.com/forum/topic/38358/answers-to-the-moogle-tests/2/#2346650 Note: As of May 26th, the maximum bandwidth for all the images may have been reached for those posts.